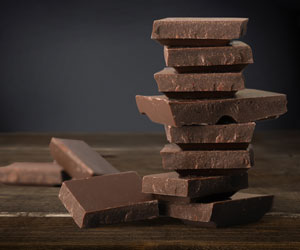 Yeast Diversity may Help Explain Difference in the Taste of Chocolates

Do you love Swiss chocolates more than those from Indonesia? You may thank diverse yeast population for that particular taste.
Advertisement
‘Couverture chocolate, which is cocoa butter from the purest and the richest cocoa beans from around the world, has various health benefits.’

* Cocoa is one of the highest known natural sources of anti-oxidants in the world. It is rich in Flavan-3-ol, anti-oxidant compounds which can improve cognition, lower blood pressure and increase circulations.

Dietary intake of flavanols has been shown to have a beneficial effect on cardiovascular health but these compounds are often destroyed during normal food processing.
Advertisement
* Cocoa butter which is one of the main ingredients in the preparation of couverture chocolates, helps in combating kidney problems and also prevents cardiac diseases.

* Real couverture dark chocolate is said to reduce risk of arteriosclerosis (thickening of walls of arteries in a person's body which hampers the blood flow).

* Due to low glycemic index of chocolate, one can be carefree about surge in blood sugar levels.

* Flavonoids present in cocoa can help one in getting glowing and healthier skin.

Different yeasts yield different flavors, indicating that it would be possible to create a whole range of specialty chocolates to match everyone's favorite flavor.
Advertisement
<< Simple Tips on How to Dress Up for Halloween and Have Fun
Novel Way to Slow Skin Fibrosis in Scleroderma >>

Macaroons and Chocolates Are Two Things Which Serena Williams Craves

She's one of the most popular tennis players around and she has admitted to having a fettish for macaroon. Who is it? It's none other than Serena Williams.