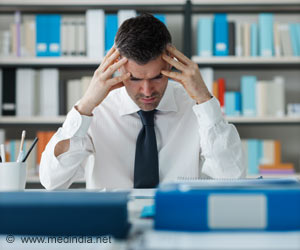 Higher levels of chronic stress hormones can promote resistance to drugs, which are used to treat lung cancer patients with EGFR mutations, reveals a new study.

The new research was from The University of Texas MD Anderson Cancer Center.

Retrospective analysis of clinical patient data suggests that beta blocker drugs may slow or prevent the development of resistance to EGFR inhibitors.


The research, published in Science Translational Medicine, used non-small cell lung cancer (NSCLC) cell lines and mouse models to discover and validate the pathway by which stress hormones drive resistance to these therapies, known as EGFR tyrosine kinase inhibitors (TKIs).
Advertisement
Approximately 160,000 people in the U.S. are diagnosed with NSCLC each year, and roughly 15,000 have metastatic disease with EGFR mutations, meaning they could benefit from targeted EGFR inhibitors.

For these patients, EGFR inhibitors initially work well, but resistance inevitably develops, explained John V. Heymach, M.D., Ph.D., chair of Thoracic/Head and Neck Medical Oncology. This resistance is sometimes associated with another EGFR mutation, called T790M, but in other cases the cause is not well understood.

"It is generally accepted that stress is not good for cancer patients, but a cancer diagnosis as well as the necessary treatments can be quite stressful. This data indicates that stress hormones may act directly on tumor cells and promote resistance to therapy," said Heymach, the study's senior author.

"The concept that beta blockers, which are well-tolerated and inexpensive, may improve responses to EGFR targeting agents is exciting and should be tested clinically."

Researchers had previously identified a connection between EGFR inhibitor resistance and the immune signaling protein IL-6, which is activated by stress hormones. Therefore, the researchers sought to investigate stress hormone signaling as an alternative mechanism driving resistance to EGFR targeted therapies.

The extensive pre-clinical testing was made possible through infrastructure established by MD Anderson's Moon Shots Program, a collaborative effort focused on accelerating the development of scientific discoveries into clinical advances that save patients' lives. The Lung Cancer Moon Shot, co-led by Heymach, has established several pipelines to repurpose existing drugs and perform large-scale drug screening in cancer cell lines.

In cultured cell lines, the researchers modeled resistance to common EGFR TKIs, which led to increased levels of IL-6. Stress hormones, such as epinephrine and nor-epinephrine, could increase IL-6 levels by binding to β2-adrenergic receptors and activating specific signaling pathways, explained Monique B. Nilsson, Ph.D., senior research scientist and the study's lead author.

"This means that the same type of receptors that sense stress in other parts of your body, like in the lung and blood vessels, are also on tumor cells and that stress can "activate" these cancer cells as well," said Nilsson. "Interestingly, the effect of stress hormones on IL-6 induction was most pronounced in NSCLC cells harboring EGFR activating mutations, and our data indicate there is cooperative signaling between mutant EGFR and β2-adrenergic receptors."

Based on their pre-clinical data, the researchers performed retrospective analysis of available patient samples and data from each of the phase 3 ZEST, BATTLE and phase 3 LUX-Lung3 trials.

For patients in the LUX-Lung3 study, EGFR inhibitor treatment improved progression-free survival (PFS) relative to chemotherapy alone, with a median PFS of 11.1 and 6.9 months, respectively. For those patients who happened to be receiving beta blockers during the study, EGFR inhibitors provided an even greater benefit, with a median PFs of 13.6 months compared to just 2.5 on chemotherapy, corresponding to a 75 percent reduction in the likelihood of progression.

The researchers acknowledge the study was limited in its retrospective analysis of clinical data. While those findings are consistent with data from mouse models and NSCLC cell lines, a prospective randomized study is needed for the highest level of proof and to potentially change the standard of care.

"If beta blockers do truly slow or prevent resistance to EGFR inhibitors, then we may be able to give these patients an oral drug that is well tolerated and only costs a few cents a day, a major benefit for patients and the field," said Heymach.

The researchers are planning prospective studies to investigate the use of beta blockers in treating NSCLC patients with EGFR mutations, and hope to carry out these studies in the next few years. A full list of co-authors on the study can be found with the paper at Science Translational Medicine.

Stress Hormones Linked to Market Crisis!
High levels of cortisol- a stress hormone, can be linked to irrational pessimism and risk aversion ....

Biomarker for Stress Hormones in Animals Affected by Global Climate Change
At the University of Massachusetts Amherst, chemical analyses by neuroscientist Jerrold Meyer and .....

Depressed Mums Increase Babies' Stress Hormones
Babies born to depressed mums have higher levels of stress hormones, as well as with other ......