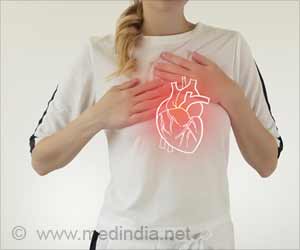 Six-week course of PCSK9 inhibitor, a cholesterol-lowering medication, found to improve the function of the coronary arteries that provide oxygen to the heart.

PCSK9 inhibitor, lowers the activity of PCSK9, a protein involved in cholesterol metabolism. These levels are higher in people with HIV and in those with high cholesterol.


In a study published in the Journal of the American Heart Association, the Johns Hopkins researchers suggest there may be a way to limit cardiovascular disease risk in those living with HIV and other cardiovascular risk factors, such as high cholesterol, by improving the function of blood vessels.

"We hypothesized that PCSK9 mediates an inflammatory response that impairs vascular function in addition to its effects on cholesterol metabolism, and we tested this idea with the protein's inhibitor to learn whether it could help people who have impaired blood vessel function," says lead author of the study, Thorsten M. Leucker, M.D., Ph.D., assistant professor of medicine at the Johns Hopkins University School of Medicine.

"We were surprised that this worked so well, but also heartened that there may be a way we can improve blood vessel function in those with increased inflammation."

For the study, 19 people with HIV and 11 people with high blood lipids but no HIV were given the drug evolocumab, a PCSK9 inhibitor, for six weeks. At the start of the study and following the course of treatment, the team used cardiac magnetic resonance imaging (MRI) to measure the area of, and blood flow in, the right coronary artery at rest and during a hand exercise, which normally results in relaxation of the blood vessels.

When healthy people perform the test, the coronary artery responds to the exercise and its area increases, enabling more blood to flow through. In people with impaired blood vessel function, such as those with HIV or high cholesterol, the artery doesn't get larger or may even constrict. Therefore, blood flow remains the same or decreases in those with impaired blood vessel function.

After the six-week treatment with the PCSK9 inhibitor, the participants living with HIV had an average 7.9% increase in coronary artery area and a 10.1% increase in blood flow during the hand grip exercise when compared to the resting value.

These changes were significantly greater than the changes from rest to hand grip exercise during the baseline pre-treatment visit. Participants with high blood lipids also had improvements in coronary artery area and an increase in blood flow after six weeks of treatment.

The researchers say future studies will need to include more patients and study them over a longer time.