China Bird Flu Fears Played Down By WHO 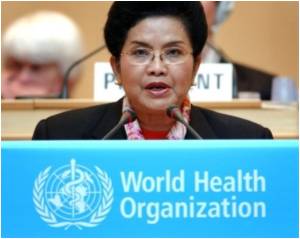 Fears over a strain of bird flu which has killed two people in China were played down by the World Health Organisation, but said it was crucial to find out how the virus infected humans.

"It's the first time that H7N9 was found in humans," the UN health agency's spokeswoman Fadela Chaib told reporters, referring to the deadly strain of avian influenza.


China's National Health and Family Planning Commission said over the weekend that two men, aged 87 and 27, died in Shanghai in early March after being infected with H7N9 avian influenza.
Advertisement
The presence of the virus in the victims was only confirmed on Friday.

A 35-year-old woman in the eastern province of Anhui, near Shanghai, was in critical condition with the virus, the commission said.

"To date the investigation showed no link between the three cases, but the investigation is still ongoing," said Chaib, adding that 88 individuals who had been in contact with the victims were being monitored.

"The state of knowledge as of now is limited," she underlined.

"They are taking the measures necessary," said Chaib.

The woman from Anhui had contact with birds, while the younger man in Shanghai worked butchering and selling meat, China's state-backed Health News said on its website on Monday, suggesting a route for transmission.

China is considered one of the nations most at risk from bird flu because it has the world's biggest poultry population and many chickens in rural areas are kept close to humans.

The more common H5N1 strain of avian influenza has killed more than 360 people globally from 2003 until March 12 this year, according to the WHO.

"There are a lot of unknowns about this H7N9 infection. We need to further investigate the extent of the outbreak, the source of the infection and the mode of transmission," said Chaib.

"For that, China shares information with us, we share it with member states," she added.