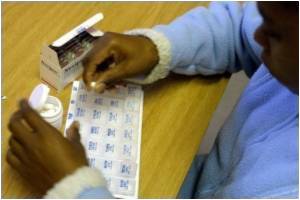 Gleevec (imatinib) - a cancer drug approved to treat certain types of cancer has shown promising results in the treatment of scleroderma, according to results from Phase II trial. Systemic scleroderma affects not only the skin, but also underlying blood vessels, and often muscles and joints, as well as the gastrointestinal tract, kidneys, lungs and heart. According to the Scleroderma Foundation, roughly 300,000 individuals have scleroderma in the United States and roughly a third of these have the systemic kind. The disease typically strikes in the prime of patients' lives, when they are 30-50 years old.

"This trial showed Gleevec has acceptable safety and tolerability, and there are hints of efficacy or suggestions the drug may work," said Robert Spiera, M.D., an associate attending rheumatologist at Hospital for Special Surgery who led the study. "This study strongly suggests that a randomized placebo-controlled trial is warranted." The study appears Online First in advance of print in Annals of the Rheumatic Diseases.

To date, there has never been a drug that has been shown to be effective for scleroderma. For the study, investigators at Hospital for Special Surgery enrolled 30 patients with diffuse scleroderma, a widespread severe form of the disease, and gave them 400 mg of Gleevec per day. Patients were evaluated monthly for 12 months during treatment and were seen for follow-up three months after discontinuing the drug.


To measure the effectiveness of the drug, researchers used a tool known as the modified Rodnan skin score, a measure of how much skin is affected by the disease. "The skin score seems to be a very good marker of disease status and most scleroderma trials use this as an outcome measure," said Dr. Spiera. Investigators also measured lung function using tests for forced vital capacity (FVC), the maximum volume of air that a person can exhale after maximum inhalation, and diffusion capacity, a measurement of the lung's capacity to transfer gases. Lung disease is the main cause of mortality in scleroderma.

How much do you know about the human skin? Please take this quiz and find out.
Advertisement
In the publication, researchers reported the final analysis of the Phase II trial data. Twenty-four of the patients completed 12 months of therapy. At one year, investigators saw a 22 percent improvement in skin scores and a 6.4 percent improvement in forced vital capacity scores. Diffusion capacity scores were stable. Dr. Spiera pointed out that in patients with scleroderma, lung function tests often get worse over time, so he was pleased with the results.

"I would be guarded to say that this drug works, because sometimes patients with scleroderma can get better on their own, especially if they have later disease, but our trial enrolled both patients with early and late disease and the early-stage disease patients also showed improvement," Dr. Spiera said. He said the findings of his open-label study need to be interpreted cautiously, and ultimately corroborated by evidence from a randomized, Phase III controlled trial.

The investigators suspected a longer duration of therapy would be necessary to see a benefit from the drug because it is an anti-fibrotic intervention, meaning it acts on the tissue, rather than an anti-inflammatory intervention, but the length of the therapy does limit the study's conclusions. "We recognize that some patients improve over time and the longer duration of therapy might have artificially led us to see a benefit that wasn't really from the drug," Dr. Spiera said. "That is always the criticism of any open-label trial in scleroderma, but you have to do an open-label trial before you can do a randomized trial." Still, he said, he was optimistic that the drug would show positive results in a Phase III trial.

The study is the largest single center trial of Gleevec in scleroderma to be reported with the longest duration of treatment and follow-up. Before this trial, test tube studies of human cells indicated that Gleevec might have some activity in combating the disease, and the drug was shown to be effective in a rodent model of the disease. Only anecdotal evidence, however, had been published on the drug's effectiveness in treating the disease in humans.

Dr. Spiera's study was funded primarily through the Rudolph Rupert Scleroderma Program at Hospital for Special Surgery. Novartis, the manufacturer of Gleevec, provided some monetary support and donated drug. The company was not involved in the design or analysis of the trial. Gleevec is approved in the United States for two types of cancer: chronic myeloid leukemia and gastrointestinal stromal tumor.

This medication is a protein-tyrosine kinase inhibitor, prescribed for treating certain type of cancers such as chronic myelogenous leukemia (cancer of the white blood cells, acute lymphoblastic leukemia(cancer of the white blood cells), gastrointestinal stromal tumors (tumors of the gastrointestinal tract and other cancers. It prevents the growth of cancer cells.
Advertisement
<< Angioplasty Safe for Multiple Sclerosis Patients
Link Between Sleep Disorder and Parkinson's Disease Symptom... >>