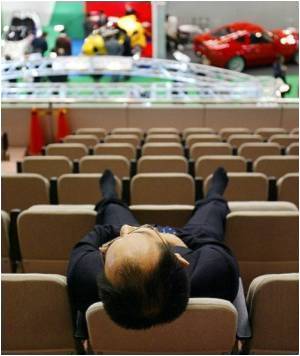 Parkinson's disease is a brain disease best known for the trembling it causes. It is an incurable, chronic disease and gradually affects the muscles and mental capacity, seriously afflicting the lives if the patient and his or her immediate relatives.

"In the study we saw that eight years before diagnosis, Parkinson's sufferers exhibited work and health indications that something was wrong," said Poul Jennum, professor of clinical neurophysiology at the Center for Healthy Ageing, University of Copenhagen, and the Sleep Centre at Glostrup Hospital.


Among the very early symptoms is the sleep disorder RBD, or REM sleep behaviour disorder. REM is a particular stage of sleep in which we dream, and our eyes flicker rapidly behind our eyelids, hence the term REM, or Rapid Eye Movement. To prevent us from actually acting out our dreams the body usually shuts down our muscle movement during REM sleep, but in RBD it is still active, and REM sleepers with RBD display a range of behaviours from simple arm and leg spasms to kicking, shouting, seizing or jumping out of bed.

"In some cases their behaviour may be violent and result in injuries to the patients or their partners," explained Jennum.

"Our hypothesis is that the very earliest stages of Parkinson's disease show up as various other diseases such as RBD," added Jennum.

The comfort of modern life comes at the cost of restful sleep! "Laugh and the world laughs with you, snore and you sleep alone-Anthony Burgess" Scientifically it is proven that a good night's sleep is imperative for maintaining a balance between the physical, emotional and behavioral well-being of a person.
Advertisement
News A-Z
A B C D E F G H I J K L M N O P Q R S T U V W X Y Z
What's New on Medindia

Diaphragmatic Hernia Pregnancy Confirmation Calculator Hearing Loss Calculator Find a Hospital How to Reduce School Bag Weight - Simple Tips A-Z Drug Brands in India Post-Nasal Drip Drug Side Effects Calculator Selfie Addiction Calculator Blood Pressure Calculator
This site uses cookies to deliver our services. By using our site, you acknowledge that you have read and understand our Cookie Policy, Privacy Policy, and our Terms of Use