Can Broccoli and Tomato Breeding be Patented?

The European Patent Office in Germany had about 300 protesters at its doorsteps, questioning the patent awarded to a company for breeding broccoli and tomatoes.

The EPO in 2002 awarded a patent to a British firm for a method to increase levels of a substance in broccoli that could potentially help prevent cancer.

Experts have come to the conclusion that genetically modified (GM) crops are not a solution for poverty, hunger or climate change.
Advertisement 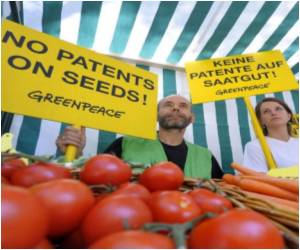 Greenpeace activists protest during a demonstration against food patents 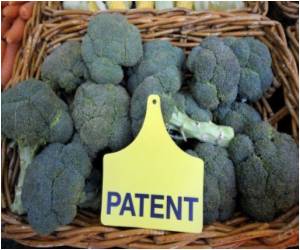 The method involves locating the relevant genes on the broccoli genome and identifying them with genetic markers. Then broccoli lines containing the substance are selected with these markers and used in plant breeding.


But rival firms have challenged the patent, together with another for a way of breeding tomatoes with low water content for making ketchup, saying that the methods constituted natural processes and were therefore not patentable.

Professor Margaret Rayman, a British nutritionist, has revealed that certain foods are very adept at preventing prostate cancer.
Advertisement
An EPO review board, which began on Tuesday a preliminary two-day meeting at its Munich headquarters, was likely to publish its decision on both cases by the end of the year, the EPO said.

It said that the board would seek to determine whether marker-assisted selection was a "biological breeding process" or a technical method and therefore patentable.

Environmental pressure group Greenpeace, which said it has collected 100,000 signatures for a ban on patents on seeds, plants and animals, called it a landmark case.

"If patents on broccoli and tomatoes are not denied, then the flood gates will open," Greenpeace's patents advisor Christoph Then said.

"A small number of agriculture and food companies could in future control all food production, meaning increased dependence and prices for farmers and consumers."

The EPO said that it could "only examine whether a patent application concerns a technical development that is new and industrially applicable and involves an inventive step."

It is not authorised or able to assess its social, economic or ecological implications, it stressed, since that is a task for legislators and for the relevant European and national regulatory authorities.

French environmental crusaders are fighting back as India is toying with the idea of allowing genetically modified brinjals into market. An independent committee says the BT brinjals are unsafe.
Advertisement
<< Software Predicts Bacteria's Strategies
Creative Campaign to Fight AIDS >>

Scores of Greenpeace activists took out a demonstration here today to spread awareness about the potential dangers of allowing field trials of genetically modified brinjals.

Calculate Ideal Weight for Infants Hearing Loss Calculator Daily Calorie Requirements Blood Pressure Calculator Sinopril (2mg) (Lacidipine) The Essence of Yoga Blood - Sugar Chart Turmeric Powder - Health Benefits, Uses & Side Effects Color Blindness Calculator Find a Doctor
This site uses cookies to deliver our services.By using our site, you acknowledge that you have read and understand our Cookie Policy, Privacy Policy, and our Terms of Use  Ok, Got it. Close
×