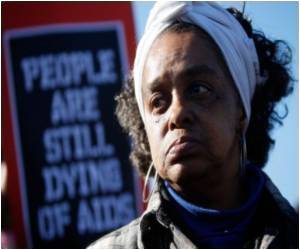 The Global Village at the World Aids Conference in Vienna, Austria witnessed a campaign that was colourfully creative and even crazy as activists took part in different activities on Tuesday.

At one end of the Village, super-heroes Methadone Man and Buprenorphine Babe stood in bright latex suits, ready to affront the deadly scourge of HIV/AIDS. 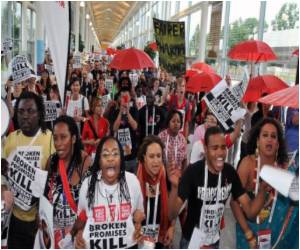 Campaigners wave placards and shout slogans during a demonstration 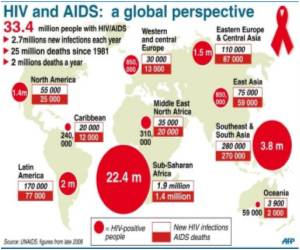 Map showing the incidence of AIDS and HIV around the world

Methadone and buprenorphine are used to treat drug addiction, especially to heroin, which is a major contributor to the AIDS epidemic due to shared needles.


"We wanted to make a campaign that was fun and dynamic, something that would make people gravitate towards the campaign rather than us going to them," Carlos Moreno, who produced a comic book of the two heroes for the Open Society Institute project, told AFP.
Advertisement
"When you approach people in this sort of method, people let their guard down a little bit, so you can talk about this in a much more fun and memorable way that sticks with you later."

Over 120 booths from 80 countries have set up shop in the hall adjoining the conference centre where the biennial AIDS congress is being held this week.

But while free condoms and brochures on prevention and awareness were the norm, more than a few exhibitors decided on a new approach.

Visitors were queuing up for a copy of The Adventures of Methadone Man and Buprenorphine Babe, a free T-shirt, or a picture with the two superheroes.

Major signs urging visitors to "Condomize" were spelt out in variously coloured condoms.

And on the main stage, transgender dancers from India performed a Bollywood show, while a group of youngsters from Kyrgyzstan presented a musical on gender issues, HIV and discrimination, to warm applause by an eager crowd.

Above the hall, large quilts paying tribute to AIDS victims acted as another reminder of the risks of HIV.

Inspired by the international Names project, founded in the United States in 1987, an Austrian outfit was encouraging visitors and delegates of the conference to paint a panel to commemorate a dead friend, which would later be sewn into a large quilt.

And the booth was buzzing with creative energy.

"I think it's a very good combination between the official part of the conference with the medical and research work -- it goes from brain to brain -- and here we work from heart to heart," said Friedl Nussbaumer, one of the coordinators of the Austrian Aids 2010 Memorial Quilt project.

"If you look at the names of the dead people, they are part of the conference in some way," he said emotionally.

"When you see those people painting and thinking of those who died, it's very emotional."

Not far from there, participants were attaching messages to a colourful weeping willow made of crepe paper.

The Dutch AIDS Foundation East-West, behind the "Wish Tree" idea, collected over 5,000 messages on a tour of eastern Europe and central Asia to raise awareness about HIV and AIDS ahead of the conference.

And by the end of the week, they hoped to have 10,000, the project's spokeswoman Ilona van de Braak told AFP.

"It's very important that all the voices in the region are going to be heard here at the conference."

Besides those on the tree, many messages -- from children, HIV-positive women hoping for healthy babies, and others asking for treatment -- were being packed into large post bags to be delivered to the head of UNAIDS, Michel Sidibe, and of the Global Fund to Fight Aids, Michel Kazatchkine, later in the week.

The tree itself will be planted outside the Vienna conference centre after the event is over.

"It's going to be planted in the park as a remembrance of the conference but also of the promises made here in Vienna," said van de Braak.