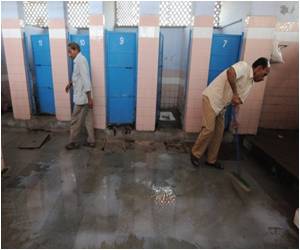 'Take Poo to Loo', an innovative digital-led campaign focusing on youngsters to put an end to open defecation has been launched by the Unicef.

Through interactive social media components like Facebook, Twitter and YouTube on-ground activations across New Delhi, Pune, Hyderabad and Mumbai, the campaign aims to promote young participation and create active advocates who can speak out against open defecation.

Crafted in quirky language, it has different tools such as games, mobile applications and ringtones. In addition, to amplify the impact of the campaign a series of videos and a song will be launched.


The campaign protagonist - Poo - will be visiting public places, colleges, schools and other places in the four cities during the three-month long campaign.
Advertisement
"In India, more than 620 million people defecate in the open, this represents half of the population. The other half have become blind to the practice. It is socially accepted norm," said Sue Coates, chief of Unicef WASH (Water, Sanitation and Hygiene), India.

She says human excreta in the environment is a risk to all, therefore, there is a need to raise voice.

"A change is needed. Everyone has to consider the practice as totally unacceptable. By creating a buzz, we aspire to put pressure on all different actors in the society who need to act to make change happen," she added.

Initially, the UN agency through the campaign is targeting the urban young people, who can speak out against the practice of open defecation and also influence their communities, families, and peers to do the same.

The UN agency is working with civil society groups, corporate, institutions and key influencers to spread the word about it.

India has made tremendous progress in the provision and use of toilets in the last 20 years, reducing the practice of open defecation from 75 percent of the population in 1990, to 51 percent in 2010.

Each year nearly 20 million people start using toilets. However, India is still home to the world's largest population of people who defecate in the open.

Source: IANS
Advertisement
<< One in Ten People Could Suffer from Diabetes by 2035, Revea...
New Compound That Inhibits Cognitive Impairment in Animal M... >>

Jairam Ramesh Hopes To End Open Defecation in 10 Years
One of India's biggest curses - the practice of open defecation - would be totally abolished in 10 ....