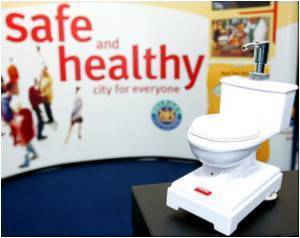 To lift a deadly taboo on talking about toilets and to turn the world into an "open defecation-free zone", the United Nations has launched a campaign.

The World Water Day initiative aims to cut the 3,000 children under five who die each day from water-borne diseases like cholera, dysentery and diarrhoea, and the 2.5 billion people without access to a toilet.

"Here is a silent disaster which needs to have attention," said UN Deputy Secretary-General Jan Eliasson, a pioneer in unsanitized talk about toilets.


"There is an element of taboo around toilets and open defecation," said Eliasson, who recalled a speech to the UN General Assembly in 2010.

"There was a little bit of 'hmmm hmmm' murmuring in the hall, I finished the speech with the word 'toilet.' It was not very common in the UN. The words which I will speak more and more often now is: 'open defecation.'"
Advertisement
The practice is "a fact of life" for the hundreds of millions of chronically poor people who have to go to toilet in the open air.

"Can you imagine the lack of dignity around this act, the risk of being raped if you are a woman or a girl going out at night, but also the health risk for personal health and the environment?" the UN official asked.

Cutting by half the number of people with no access to fresh water by 2015 was one of the eight Millennium Development Goals on health and poverty set in 2000.

It is the target that is most off course. At the current pace, the water target may be reached by 2075. "We have an uphill battle, it is lagging so seriously," Eliasson, a former Swedish foreign minister, told reporters.

Kate Norgrove, of the WaterAid group, told of how she was a teacher in a Nepal village where the school's single toilet was "a little broken down shack that sat directly above the school playground in full visibility of everyone."

Girls gradually dropped out as they reached the age when they would start to menstruate, she said.

The problem could get worse before it gets better. Hungary's UN Ambassador Csaba Korosi, a leading UN campaigner on improving sanitation, said 65 percent of the world's population will live in or around cities by 2020 and health problems will pile up if no action is taken.

It will be "a huge challenge for human dignity," he said.

The UN wants to set a new deadline of 2025 to get water access up to the MDG target level. WaterAid says 2030 is more realistic and that tens of billions of dollars will have to be spent.

"There is not enough money for sanitation and it is not spent the right way, quite often," said Norgrove.

According to Eliasson, governments must spend more on sanitation and the UN should make toilets a higher priority.

More public education is also required to avoid disease. "Sometimes it is as easy as showing someone how to wash their hands," said Norgrove.

The UN Children's Fund says that its work with private agencies has helped 25 million people into "open defecation free environments."

Eliasson is shaking high society with his campaign. Last year, he took his "open defecation" talk to a World Bank summit of finance ministers in Washington.

"It was one of the best meetings I can recall," said Eliasson, who will be urging ministers again to spend on sanitation at their spring talks next month.

6 in 10 People Worldwide Lack Access to Flush Toilets: Study
A new study has found that 6 out of every 10 people on Earth still do not have access to flush ......

Thailand to Phase Out Squat Down Toilets Over Next Three Years
Thailand's Public Health Ministry revealed that it will be removing more than 90 percent of the ......