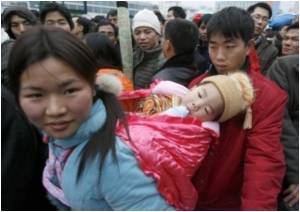 The areas of the human brain which portray the maximum growth during infancy and childhood are nearly similar to the brain regions which undergo maximum change when humans are compared to primates.


The number of babies born before term in the United States has risen steadily to reach 12 percent of all births, said Terrie Inder, professor of pediatrics at Washington University in St Louis and a lead author of the study published in the Proceedings of the National Academy of Sciences.

"This study and the data that we're gathering now could provide us with very powerful tools for understanding what goes wrong structurally in a wide range of childhood disorders, from the after-effects of premature birth to conditions like autism, attention-deficit disorder or reading disabilities," Inder said.

The researchers used a technique called surface reconstruction to compare regions and structures in different brains.

In analyzing the brain scans of 12 full-term babies and comparing them to the scans of 12 healthy young adults, the researchers found that the cerebral cortex -- the wrinkled area on the surface of the brain responsible for higher mental functions -- grew unevenly.

A quarter to a third of the cortex expanded around twice as much as other cortical areas during normal development.

The findings reveal "evolution's imprint on the human brain" because the rapidly developing parts of the brain are also those that differ most when the human brain is compared to primates'.

High-growth regions have been linked to advanced mental functions such as language and reasoning and traits that make humans uniquely human.

Previous studies have shown that many of the brain's high-growth regions "are expanded in humans as a result of recent evolutionary changes that made the human brain much larger than that of any other primate," said David Van Essen, one of the study's authors.

Van Essen, who developed the surface reconstruction technique used to scan the brain regions, speculated that the full physical growth of the rapid-growth regions may be delayed somewhat to allow them to be shaped by early life experiences.

Inder hypothesized that certain regions of the brain might develop more quickly in young infants for evolutionary reasons.

For instance, the part of the brain responsible for vision, which is necessary to allow a baby to bond with his mother during nursing, develops early, while brain functions less important early in life come later.

Survival Chances Better For Premature Babies With Probiotics
Researchers say it is possible to save thousands of very premature babies by adding probiotics to their feeds.
READ MORE

Premature Babies Have Ability to Differentiate Between Objects
A new study by has found that premature babies have the ability to recognize objects and distinguish between them as well.
READ MORE

Lives of Premature Babies Saved by Pioneering 'Brainwashing' Treatment
A pioneering 'brainwashing' procedure they believe will slash the number of premature babies suffering severe disabilities has been developed by UK scientists.
READ MORE