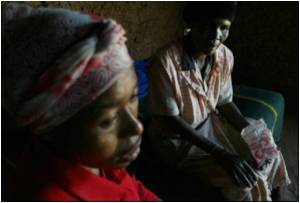 Elizabeth Maseswa remembers the treatment meted out to her after she revealed her HIV status to her family, which also prompted her to drown her sorrows on the football field.

"Five years ago, my own mother disowned me and ordered me out of the house. I had no one to turn to before I joined the team," said 26-year-old Maseswa, the skipper of the table-topping ARV Swallows.
Advertisement

"Playing football helps me a lot, it relieves stress and we share our problems as a team."


The ARV (Anti-retroviral drugs) Swallows are one of 16 teams all made up HIV-positive women formed by veteran football administrator Chris Sambo.
Advertisement
Other teams include Stigma Eradicated and Virus Ambassadors, whose players have forged a family-like bond which should be the envy of some of the teams who have exited the World Cup in neighbouring South Africa.

In a country which is not only in the eye of the AIDS pandemic's storm but also suffered severe food shortages during a prolonged economic crisis, such solidarity and companionship is vital.

"Sometimes I have lacked even basics like salt, but once I tell my teammates they help me out and also get me things I haven't even mentioned," said Maseswa. "We share each other's burdens."

Apart from the camaraderie, players say the football had made them fitter.

"My sister-in-law used to sing about my HIV status saying all sorts of insults, but all that has changed when I started playing football.

"Some people did not want to share a bottle of water with me, I could not walk here without fingers being pointed at me, but this has changed because I am footballer."

Sambo, a former fixtures secretary secretary for Zimbabwe's Professional Soccer League, said he came up with the idea of forming a league for HIV-positive women to cash in on football's appeal.

"Realising that football is a sport which attracts a very large following and for the purposes of demystifying HIV/AIDS, I decided to form a league of HIV/AIDS positive ladies," he told AFP.

"During matches, literature on HIV/AIDS is distributed and we have a mobile testing centre. We have also identified other 46 teams and we plan to have this project nationwide."

Sambo has sponsored the league to the tune of 10,000 dollars but said the money was not enough to cover running costs and travel expenses.

The teams play in a makeshift stadium in the Harare suburb of Epworth which has two rocks sticking out in the middle of the pitch.

At the training session, play was stopped at one stage when a piece of wire punctured the only ball, forcing coach Jonas Kapakasi to cycle to a nearby shopping mall for repairs.

"This is what we go through sometimes," he said. "But the ladies are so united. Even if one the players is not feeling well, she turns up of training because other team members give her emotional support."

The players get ARVs from Medecins San Frontiers, while a local bank and petrol company have also chipped in with kits.

While football acts as therapy to relieve stress, team members still have to fend for themselves and their families, with some poaching firewood from a neighbouring farm to sell.

The oldest member of the team is Mary Chinyama, 48, whose husband died in 2002.

"I now get along very well with other members of my family because of football," she said while cradling another teammate's child.

Zimbabwe's Ministry of Health and Child Welfare says the HIV prevalence rate in the 15 to 49 age group declined to 13.7 percent in 2009 from 33 percent 10 years earlier.

The government is struggling to provide ARVs to those who cannot afford with less than half of those in need currently accessing the drugs.

Immigration Ban on HIV Positive People Lifted in US
People who have been tested positive to HIV virus can make their trip to the United States...

HIV Positive Russian Beauty Queen Perturbed About Discrimination Against AIDS Victims
Svetlana Izambayeva , a Russian beuty queen who is HIV positive is unable to do much to free her ......