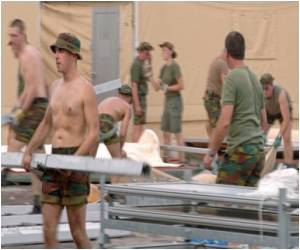 Belgium is launching a war on chubby soldiers with a diet plan to literally slim down an army in which a majority of troops are overweight, Belgian media reported on Thursday.

At the same time, the Belgian defence ministry plans to cut down its manpower to 34,000 troops by allowing 1,150 soldiers to go on early retirement next year, Belga press agency reported.

Those who stay will have to work on their waistlines.


An army spokeswoman cited by the Flemish newspaper Het Nieuwsblad said that 60 percent of soldiers were overweight, and of those 15 percent were obese.

The BMI calculator helps you assess your weight indicating if it is normal or if you are underweight or overweight, based on your height.
Advertisement
"Just like a firefighter, a soldier must be in shape," the spokeswoman, Ingrid Baeck, told Nieuwsblad, noting that the average age of Belgian soldiers is 40 years old.

"The defence chief (General Charles-Henri Delcour) has again stressed the problem 10 days ago. We want to get rid of the image of the 'fat soldier'," Baeck said.

The military will launch the diet programme in the autumn.

The Belgian military has also been on a financial diet.

The defence budget has been falling every year since 2008 and hovers around 1.0 percent of gross domestic product, lower than the 2.0 percent threshold demanded by NATO to its members.

The Belgian army is not the only NATO member with chubby soldiers within its own ranks. Around 4.4 percent of US soldiers, or around 69,000 men and women, were considered obese in 2008, according to Pentagon figures.

Slide show which explains obesity causes and tips on how to lose weight. Exercising before breakfast is most effective for weight loss.
Advertisement
<< Daughter's Mental Health Affected by Mother's Alcoholism
No Five-second Rule for Fallen Food >>