Being Active in Midlife May Reduce Dementia Risk 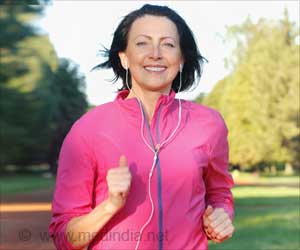 Being physically and mentally active in midlife can reduce the risk of dementia in later life, reports a new study. The findings of the study are published in the Neurology®, the medical journal of the American Academy of Neurology.

Keeping physically and mentally active in middle age may be tied to a lower risk of developing dementia decades later, according to a study. Mental activities included reading, playing instruments, singing in a choir, visiting concerts, gardening, doing needlework or attending religious services.

Dementia has become a very big concern as we have an aging population across the world. Dementia is also terrifying to us because of its disturbing symptoms and limited treatment options.
Advertisement
‘Engaging in physical activities (such as walking, running, swimming, gardening, bowling, and biking) and mental activities (such as reading, playing instruments, singing in a choir, visiting concerts, doing needlework or attending religious services) can reduce your risk of dementia.’
Read More..
Tweet it Now


"These results indicate that these activities in middle age may play a role in preventing dementia in old age and preserving cognitive health," said study author Jenna Najar, MD, from the University of Gothenburg in Sweden. "It's exciting as these are activities that people can incorporate into their lives pretty easily and without a lot of expense."

Dementia in Early Stages can be Managed Better without Medication

Symptoms of dementia like agitation and psychosis should be managed through non-drug strategies initially, says a panel of experts from across the globe.
Advertisement
Participants were given scores in each of the five areas based on how often they participated in mental activities, with a score of zero for no or low activity, one for moderate activity and two for high activity. For example, moderate artistic activity was defined as attending a concert, play or art exhibit during the last six months, while high artistic activity was defined as more frequent visits, playing an instrument, singing in a choir or painting. The total score possible was 10.

For physical activity, participants were divided into two groups, active and inactive. The active group ranged from light physical activity such as walking, gardening, bowling or biking for a minimum of four hours per week to regular intense exercise such as running or swimming several times a week or engaging in competitive sports. A total of 17 percent of the participants were in the inactive group, and 82 percent were in the active group.

The researchers took into account other factors that could affect the risk of dementia, such as high blood pressure, smoking, and diabetes. They also ran the results again after excluding women who developed dementia about halfway through the study to rule out the possibility that those women may have been in the prodromal stage of dementia, with less participation in the activities as an early symptom. The results were similar, except that physical activity was then associated with a 34-percent reduced risk of dementia overall.

Limitations of the study are that mental and physical activity were assessed only at the beginning of the study and that all of the participants were white Swedish women, so the results may not be representative of the general population worldwide.

Regular exercise for just six months can significantly reduce the decline in brain function seen in older persons that is not severe enough to be diagnosed as dementia, finds a study.
Advertisement