Bacteria Will be Used to Fight Bad Smell at Germany's Oktoberfest 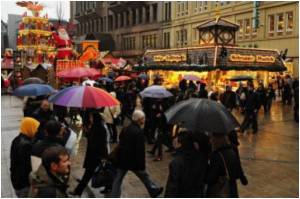 Microscopic bacteria will be used in Germany's Oktoberfest to fight smelly odours during the drinking and eating event.

In the wake of the recent ban on smoking in public places in the southeastern state of Bavaria, the Munich-based extravaganza will rely on another method to purge rotten smells.

Dry Your Hands Well After Washing to Stop Spread of Bacteria

A new study has pointed out that drying ones hands well after washing them helps in stopping the spread of bacteria.
Advertisement

Earlier, the clouds of cigarette smoke helped in masking the stench of stale beer, sweat and bratwurst-breath.


According to Der Spiegel, the organisers have planned to pour a revolutionary solution containing special bacteria on floorboards, tables and toilets for the event, which completes 200 years, reports News.com.au.

The microbes should eat up the offending fumes leaving nothing but a subtle, soil-type smell, if all goes according to plan.

Oktoberfest festival would run from September 18 to October 4.

A new study has revealed that treating patients with insulin may reduce their chances of succumbing to an infection.
Advertisement
Advertisement