Assaults and Brawls Reduce With Restriction on Pub Closing Times 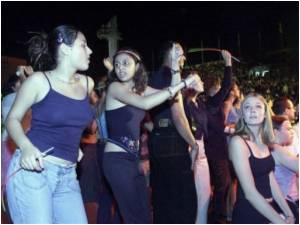 A study published in the international scientific journal Addiction reveals that assaults and brawls reduce with restriction on pub closing time.

The study, conducted at the University of Newcastle, shows the number of assaults in the Central Business District (CBD) fell from 33 per month before the restrictions were put in place, to 22 afterwards.

The team of researchers, led by Associate Professor Kypros Kypri, compared the Newcastle CBD assault rates with those in the nearby suburb of Hamilton, where late trading venues were not subject to the restriction. The study took into account long term trends in assault rates as well as certain reporting biases.


"It is a common belief that restricting closing times just shifts the problem to a neighbouring area or to an earlier time. We tested this displacement hypothesis and found no such effect. Further, we found evidence of reduced assaults before the 3.30am closing as well," A/Professor Kypri said.

Calorie Count Information may be Made Mandatory at Restaurants and Pubs

Restaurants and pubs may be forced to divulge information on calorie counts in their dishes.
Advertisement
In 2008, due to the high rates of alcohol-related violence and social disorder occurring in Newcastle CBD, the NSW Liquor Administration Board (since abolished) imposed restrictions on 14 CBD venues. Pubs and clubs were required to close at 3.30am and to implement a 1.30am lockout to prevent more patrons from entering the venue.

Governments throughout Australia have so far resisted introducing earlier closing times. "One has to wonder what sort of reduction in harm would occur if licensed premises across Australia were to cease serving alcohol at 2am, as is required, for instance, everywhere in California, and how many serious injuries could be prevented," A/Professor Kypri said.

A student has developed a novel 'speech bubble' helmet that can cut noise in a pub so that it is easy to have a conversation with friends without shouting.
Advertisement
<< Tw-Eat Tw-Eat: Enter the Twitter Cookbook, in 140 Character...
Ill Effects of Internet as Grave as Climate Change: Promine... >>

Brits Spend More Than A Year of Their Lives in Pubs!

Post-Nasal Drip Blood Pressure Calculator Find a Doctor Drug Interaction Checker Diaphragmatic Hernia Drug - Food Interactions Sanatogen A-Z Drug Brands in India Noscaphene (Noscapine) Loram (2 mg) (Lorazepam)
This site uses cookies to deliver our services.By using our site, you acknowledge that you have read and understand our Cookie Policy, Privacy Policy, and our Terms of Use  Ok, Got it. Close
×