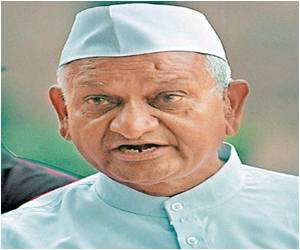 Veteran social activist Anna Hazare who was undergoing treatment for acute bronchitis since last week has been discharged.

Hazare was admitted to Sancheti hospital in Pune on December 31 after he suffered chest infection and weakness.


Talking to reporters here, Hazare said: "Dr. Sancheti and other doctors made efforts and I am better now but felt a little weak.


He refused to take questions on the anti-corruption movement, and said that he will speak only after he recovers completely.

"It's been 10 days I am not in contact with the world. After getting totally ok I would think about it," he added.

Concern over Anna Hazare's health have been mounting ever since he went on a three-day fast to press his forum's demand for a strong and effective Lokpal body at Mumbai recently.

Anna Hazare was forced to cut short his hunger strike after a team of specialists advised him to start eating again on the second day of his fast, citing low blood pressure, weakness and threat to his kidneys.