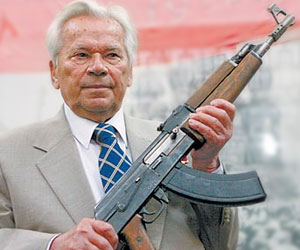 Mikhail Kalashnikov, designer of AK-47 automatic rifle passed away on Monday at the age of 94, reveal sources.

Kalashnikov has designed the assault weapon that was seen in the Soviet Union as a national hero and symbol of Moscow's proud military past.

According to News24, Kalashnikov had been honoured with the prestigious Hero of Russia prize for designing the iconic rifle.


During an award ceremony marking his 90th birthday, Kalashnikov had said that he created a weapon to defend the fatherland's borders and it wasn't his fault but that of the politicians that the weapon was sometimes used where it shouldn't have been.
Advertisement
The name 'AK-47' stands for "Kalashnikov's Automatic" and the year it was designed, 1947.

Wounded during a combat in 1941, Kalashnikov designed his rifle in 1947, driven by Soviet defeats in the early years of World War II at the hands of far better armed German soldiers.

Five Year Old Kills His Sister With His First Rifle
In another shocking case of gun violence in the United States, a five-year old boy accidentally ......

Most Americans View National Rifle Association Favorably
According to a poll more number of Americans have a favorable view of the nation's largest gun ......