After Docs Fail to Find His Heart, 34st Man Vows to Lose Weight 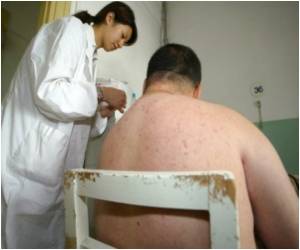 It has emerged that a man in the UK has vowed to shed weight after doctors failed to detect his heartbeat - because he was so fat.

Alan Belmont, from Worcester, who weighs 34 stone, was shocked when doctors told him they could not find his pulse despite using a stethoscope and even an ultra-sound machine.

Doctors told him the hospital's machines were not powerful enough to penetrate his thick layer of blubber.


Medics eventually found a weak pulse under his arm and were able to give him a reading.

But the experience shocked Belmont, who wears a staggering XXXXXL clothing, into losing weight.

Being physically very active is the mantra to prevent pediatric obesity rather than concentrating efforts at restricting energy consumption.
Advertisement
Belmont, 24, has set himself the incredible target of losing 20 STONE - nearly half his body weight.

"I went to the hospital recently and they told me they couldn't find my heart and I thought to myself "I'm a dead man walking," the Daily Mail quoted Belmont as saying.

"They could not even find it using an ultra sound, which is what they use on pregnant women.

"I was quite embarrassed when the doctors said they couldn't find my pulse. It suddenly hit me that I had to make a drastic change to my life and lose weight.

"When I get in cars I can't get the seatbelt on so I would like to get myself fit. I would just like to be a normal person again," Belmont added.

Belmont, who admits he has become a partial recluse in recent years, has now started a rigorous exercise routine in a bid to shift the weight.

"I want to get back to 15 stone so I can play rugby again. I know I've got a lot to lose but I'm determined to do it.

"I keep thinking back to the look on the doctors faces when they couldn't find a pulse and I think I never want that to happen again," Belmont added.

Obesity is a condition where there is excess accumulation of body fat which poses a risk to the health of the individual. It can affect children and adults.
Advertisement
<< Research Says Icebergs in the Antarctic Play Important Role...
Indian Drug Companies Rejected >>

More News on:
The Cabbage Diet The Macrobiotic Diet Height and Weight-Kids Weight Loss with Hypnosis  Does It Work?