by Vishnuprasad on  May 6, 2015 at 7:30 PM Medindia Exclusive - Interviews and In depth Reports

Retinopathy is a disease that occurs on the retina. The retina is a thin layer of cells that lines the back of the eyeball. It senses the light, which gets into the eye and sends information about it to the brain. Many people with diabetes get retinopathy and it is called diabetic retinopathy. Diabetic retinopathy can lead to poor vision and even blindness.

A recent study led by Dr. Shahina Pardhan, director of the Vision and Eye research Unit (VERU), at Anglia Ruskin University, UK, examines the impact of age and duration on vision-threatening retinopathy in South Asians and Caucasians.


A: Yes, the South Asian community is at a higher risk of developing diabetes and, indeed, diabetic complications including diabetic eye diseases . The Vision and Eye Research Unit (VERU), at Anglia Ruskin University, UK, has collaborated with various international partners, including the World Health Organization, to provide estimates of blindness and visual impairment in the world. Evidence shows that there is higher prevalence of diabetes in South Asia when compared to many other parts of the world. In the UK, the prevalence of diabetes among South Asian people is six times higher than in Caucasians.

Q: How does diabetes affect eye and vision?

A: Diabetes causes changes in the lens of the eye so it can cause early cataracts. Cataract is a condition in which the lens of the eye gradually becomes opaque, resulting in a decrease in vision. Among the other most significant conditions are changes in the retina which can lead to blood leaks and hemorrhages in the eye. This is called diabetic retinopathy. This can progress to irreversible blindness if left untreated.

Diabetic Retinopathy Can be Divided into Four Stages:

In addition, macular edema occurs when fluid and protein deposits collect on the yellow central area of the retina called macula and causes it to swell. Macular edema can occur at any stage of diabetic retinopathy, but it typically occurs as the disease progresses.


Symptoms of Diabetic Retinopathy may Include:

Q: What are the major factors that increase the risk of developing diabetic retinopathy in South Asians compared to Caucasians (white people or people of European origin)

A: Our research has shown a number of differences between different groups. The study evaluated the impact of the major risk factors on the probability of sight-threatening retinopathy (STR).

A total of 500 diabetic patients - 268 Asians and 232 Caucasians - who visited diabetic clinics in Bradford, UK, during a particular period of time were studied for severity of diabetic retinopathy. The existence of STR was compared in the two groups. Major risk factors such as age, duration and hypertension were evaluated against the probability of STR in each of the two races.

Our analysis found that Asians demonstrated significantly higher rates of STR. The analysis also showed that age, duration, race, gender, and insulin-requiring status are linked to STR. The population-based study highlighted that Caucasians had a 12.5-year longer duration than Asians for the same level of STR.

There was also evidence of lower awareness of nutritional content of food and lower awareness of the importance of good control of diabetes. Asians were less concerned if they missed their hospital eye appointments. Asians also exercised less frequently and smoked more.

Q: How can we prevent diabetic retinopathy?

Have your eyes examined by an eye specialist every year. The screening will not prevent diabetic eye disease. But it can help detect diabetes eye diseases early and avoid vision loss.

Immediately consult an ophthalmologist if you feel vision changes such as floaters, blurry or double vision. These are indications of serious damage to your retina.

Q: What should policy makers do to reduce the prevalence of diabetic retinopathy in South Asia?

A: It would be good to take more affirmative steps to create awareness on diabetes and hypertension and of how lifestyle choices can influence diabetes and its complications. Examples include ethnic friendly written materials, champions in the community, ethnically supportive support groups and eliciting the support of family members.

Q: Tell us about your future research plans with VERU? Also tell us how it's going to change the lives of people with vision problems.

A: I lead a large multi-center international research project that explores factors that influence the progression of sight-threatening diabetic retinopathy. The project investigates the profiles of diabetic retinopathy in rural and urban communities and explores the non-clinical factors that influence these populations. It builds upon my existing research on diabetic retinopathy in South Asians. My international collaborators include SankaraNetralaya Hospital in India (Chennai), Peterborough NHS Trust (UK), the RNIB (UK), AIMS (Kochi), and hospitals in Nepal and Darjeeling. The long-term plan is to provide evidence-based data on how non-clinical intervention, such as improving self-help and self-knowledge, results in decreased blindness. 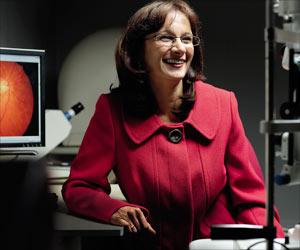 Insight into Preventing Eye Diseases Such as Diabetic Retinopathy, Macular Degeneration
Neurons in the eyes produce a chemical that is critical for the survival of blood vessels and function of photoreceptors to maintain eyesight.
READ MORE