The retina is a thin tissue which lines the inner aspect of the back of the eye ball. When light falls on the eye, it is focused by the optical apparatus of the eye onto the retina. The light is absorbed by the photosensitive pigments in the specialized cells (rods and the cones) of the retina and initiates photochemical changes which are converted to electrical signals which are carried through the optic nerve to the brain. These signals are perceived and interpreted in the brain.

The retina can be compared to the film of a camera onto which the image is captured.

Retinal detachment is a condition in which the retina completely or partly detaches from its attachment to the underlying tissues in the eye. Vitreous is a clear gel which fills two third of the eye ball. It may exert a pull on the retina leading to holes or tears in the thin retinal tissue and its separation from the underlying tissues called the retinal detachment. The hole is also called a rhegma, hence the separation due to a hole is called a rhegmatogenous detachment. The vitreous gel may liquefy as part of the normal ageing process or pathologically as in the case of myopia. Liquefied virteous can seep through the hole or tear causing the retina to detach further.

The prognosis of retinal detachment is generally poor. Prognosis is good if the central retina is not detached and early repair done.

my husband detached his left eye retina while on vacation. he was seeh 1 week later and confirmed a complete retinal detachment. was schedule for a pars plana vitrectomyon the 10th day but was cancelled due to a stye that developed on that eye.was put on doxycycline bid and erythromycin oint 3x a day and bedtime.5 days paseed and suregery was finaly done yesterday.surgeon was very pleased and very optimistic about the eye. the macula was involved dont know if it is on and off macula detachement as well.what are the chances of vision recovery in this particular situation.he is on prone sitting position right now possibly a week he said.today he lasered the remainder fluid left over by the macula and still very pleased about the outcome of surgery.can you give me percentage of vision recovery. my hussband has noexisting med. problem. he had bilateral cataract extractions last year wwww/ a unifocal lens implant. thank you

Retinal Tear may Cause Eye Floaters and Flashes of Light
A new study says that suddenly seeing floaters or flashes of light may indicate a serious eye problem that - if untreated - could lead to blindness.
READ MORE

Retinal Detachment Can Be Treated Through Surgeries
An American research team has found that retinal detachment, a condition that puts an individual at risk for vision loss or blindness, can be treated with using one of three currently
READ MORE 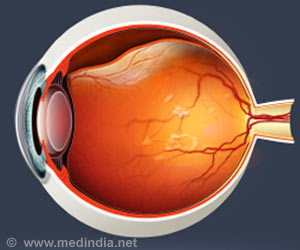 Vitreous Detachment
Posterior vitreous detachment is usually painless and may not impair vision. However complications such as retinal detachment may ensue. Vitreous fills most of the interior of the eyes.
READ MORE

Vitrectomy - Surgical Procedure
Vitrectomy is a surgical procedure performed to remove a part or whole of the vitreous humor inside the eye.
READ MORE

Retinoblastoma
Retinoblastoma is a type of cancer of the eye occurring in children. Early diagnosis and treatment, and genetic counselling can go a long way in saving life and vision in children and siblings at risk for this disease.
READ MORE