Written by Mary Selvaraj
Medically Reviewed by The Medindia Medical Review Team on July 11, 2019 at 6:14 PM

Microbiome is the microbiological environment in our body, especially that of the gut. Although used synonymously, the two terms microbiome and microbiota, have minor differences. Microbiomes refer to the collection of genomes of these microorganisms in the environment, and Microbiota is the specific microorganisms themselves in a particular environment.

A Year in Space Has Little Effect on Gut Microbiome: Study
A year in space seems to have a small but significant, transient effect on the gut microbiome, stated new study.
Advertisement
‘Microbiome is intestinal bacteria that play a role in several diseases and are influenced by the diet, be it Indian or Western.’
Read More.. 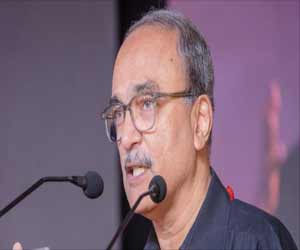 The following is an exclusive interview conducted by Medindia with Dr. B.S. Ramakrishna.


Q. Please explain about the microbiome to our readers?

A. Microbiome refers to a large number of bacteria and other smaller organisms in our body. We have co-evolved with these bacteria in our intestine over millions of years. Microbiome benefits us in terms of nutrition, immunity, and protects us from harmful bacteria such as the cholera or the typhoid bacteria. These are good bacteria or probiotics in our intestine.

Anti-diabetic Drug Has the Potential to Change Your Gut Microbiome: Here's How
Anti-diabetic drug Acarbose has the potential to change the gut microbiome, but it is a very diet- dependent change, reveals a new study.
Advertisement
Q. How does microbiome play a role in different diseases in the body?

A. Nowadays, the intestinal bacteria are being blamed for everything from obesity to diseases of the brain. But the immediate connection is with gastrointestinal disorders, such as with diarrheal diseases, fatty liver, inflammatory bowel disease. If we go beyond the gut, the first connection is with the joints because these bacteria somehow also influence the development of arthritis. Now there is a lot of research going on towards what is called the gut-brain access, and the microbiome comes in between. So it is the gut microbiome brain access, and that's been shown to be very important in a variety of conditions including perhaps autism and other similar disorders.

Q. Is the microbiota in Indians different from that of Westerners?

A. Certainly, it is the diet that determines largely what the microbiome is. The microbiome of Indians is different in many ways because we eat a lot more carbohydrates so we have a preponderance of bacteria that can ferment carbohydrates. Whereas the western diet is a very meat-based diet, you may have a predominance of what is called the Bacteroides, which are considered to be pro-inflammatory.

A. Indian diet is more carbohydrate-rich. We still do not understand the effects of other factors.

Q. What are the nutrients that help in keeping the gut healthy?

A. In the microbiome, some bacteria are considered good, for instance, bifidobacteria, lactobacilli. So there are some oligosaccharides which are sugars of small chain length, which facilitate the growth of these bacteria. There are some diets which promote the growth of Bacteroides, which is considered to be pro-inflammatory under certain circumstances.

Q. Fecal transplant is being discussed - What are your current thoughts?

A. The problem with fecal transplant is that we are taking a whole concoction of the human gut bacteria, which probably consists of more than a thousand five hundred bacterial species - some good, some bad and some neutral and we are giving the whole concoction from one person to another. So, fecal microbiota transplant under certain circumstances has been beneficial for people with antibiotic-associated diarrhea or with resistant Clostridium deficit diarrhea. These are disorders that are not prevalent in India. While there are instances of antibiotic-associated diarrhea, it generally stops with stopping the antibiotic and taking probiotics. But when it becomes resistance, these are conditions which might require a fecal transplant. It is now being used for inflammatory bowel disease, without clear evidence that there is a benefit.

Currently, in the US, clinical trials involving fecal transplants have been suspended because there have been severe infections in three patients and two deaths.

Q. What is the message you want to give to our readers?

A. In a nutshell, it lies in eating a balanced diet because as long as it has everything in balance, our microbiome is also likely to be in balance.

Does C-section, Formula Feeding and Antibiotics Effect Infants Gut Microbiome?
The development of an infant's gut microbiome is influenced by various factors such as cesarean section, formula feeding, and antibiotic use influence.

Imbalances in Gut Microbiome Strongly Linked to Lupus
The disease systemic lupus erythematosus (SLE) marked by the attack on joints, skin, and kidneys by the body's immune system is linked to an abnormal mix of bacteria in the gut.

More News on:
Seeds: Nutrient Packed Germs of Life Diet, Nutrition and Supplements for Osteo-Arthritis and Rheumatoid Arthritis Undetected Nutrient Deficiencies: the Cause of Ill Health Eat Your Way to Good Health Declining Nutritional Values of Fruits and Vegetables