Kidney cancer affects more than 51,000 people every year in the U.S, with more number of men affected than women. Early diagnosis and treatment aids in improving survival rate which is between 79 to 100%.

In a study conducted in a tertiary hospital in North India, researchers Shalini Agnihotri and colleagues found that for the Indian population,

What Are the Causes of Kidney Cancer?

Kidney cancer or renal cell carcinoma may be caused due to environmental factors or due to genetic factors. It has been found that the short arm of chromosome 3 is involved in kidney cancer.


There are many environmental factors which are also associated with kidney cancer and exposure to cigarette smoke is an important risk factor. The exposure levels determine the extent of risk for kidney cancer. Hypertension, diet and obesity are other factors that contribute to the development of kidney cancer.

Recent studies have found that barbecuing or pan frying meat can lead to the formation of carcinogenic compounds, also including alarge amount of such meat increase the risk of kidney cancer.


Must Know Facts about Kidney Cancer

1. There are four types of kidney cancer:
2. There are two surgical methods employed:
3. Surgical procedures that are designed to save the kidney among kidney cancer patients provide an additional benefit. Saving the kidney also lowers long-term risk for osteoporosis.

4. Patients with brothers, sisters or parents with kidney cancer are more likely to acquire this disease.

5. Most solid kidney tumors are malignant and biopsies are not always recommended as they may be from the benign region of the tumor, resulting in a false negative diagnosis. It is recommended that the tumor is removed on detection.

6. Symptoms of kidney cancer are blood in the urine, a palpable mass found in the abdomen, fatigue, weight loss, fever and swelling of feet and ankles.

8. Scientists and researchers are developing new drugs that help the body's immune system mount a better response to the cancer cells. Nivolumab is one such immunotherapy drug that was developed by scientists at the Sloan Kettering Institute of Cancer Studies which has been found to be very effective without producing too many side effects. This drug was recently approved by the FDA to be used by patients after clinical trials showed positive results.

10. Though the number of kidney cancer patients have been rising every year, the number of deaths due to the disease are declining.

11. Monoclonal antibodies, which are clones of specific antibodies, are being used in the treatment of kidney cancer.

12. AGS16F is a new drug used in the treatment of kidney cancer. This is a conjugate of an antibody and a drug, with high specificity for the tumor cells while normal cells are spared.

13. Chemotherapy is not very effective in kidney cancer as the cancerous cells produce multi-drug resistance protein, therefore, there is only partial improvement. Chemotherapy is used in combination with other treatment methods.

14. Scientists are developing vaccines using a patient's tumor cells to develop vaccines that are used as therapy to treat cancer. Russia has approved the use of such vaccines.

15. Patients who undergo partial nephrectomy may not need dialysis if they have a fully functional kidney and only parts of the other kidney were removed during surgery. Dialysis is a serious risk factor for kidney cancer and the patient may require it if both the kidneys are affected.

Kidney cancer is treatable if detected early and initial warning signs should be brought to the notice of a doctor for effective treatment options. 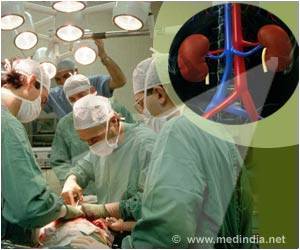 Kidney Preserving Surgery for Kidney Cancer Prevents Osteoporosis
Researchers at the San Diego School of Medicine have emphasized the importance of kidney-sparing surgery to reduce the risk of later-life osteoporosis.
READ MORE