Iridectomy is a procedure in which an opening is made in the iris of the eye.

Iridectomy, is a procedure to remove a part of the iris, which is the colored circular membrane behind the cornea of the eye. Earlier this was performed surgically (surgical iridectomy). However, now the procedure is in most cases performed with a laser (laser iridotomy).

Anatomy & Physiology of the Internal Structure of the Eye in Brief

The human eye is separated into anterior and posterior segments, with the lens included in the anterior segment. The lens is responsible for focusing the light entering the eye. The posterior segment of the eye is filled with a transparent, jelly-like fluid called the vitreous humor that maintains the shape of the eyeball and provides a clear path for light to travel to the retina, which is the photosensitive coating on the inner aspect of the posterior part of the eye. The optic nerve is connected to the retina at the back of the eye and carries nerve impulses to the brain, which interprets these signals as images. The front part of the eye or the anterior segment is filled with a watery fluid called aqueous humor which provides nutrients to the tissues of the eye. It is divided into an anterior chamber and a posterior chamber. Separating these two chambers is the iris, which is the colored part of the eye. The central opening of the iris is called the pupil, which appears black. The transparent dome through which the iris can be seen is called the cornea. The angle is the place where the cornea meets the iris. In this space is the trabecular meshwork which forms a drainage system through which the aqueous humor drains. The angle may become narrowed causing pressure build-up and damage to the optic nerve, which is called narrow-angle glaucoma or angle closure glaucoma.

What are the Types of Iridectomy?

There are several types of iridectomy depending on its location on the iris:

Who Should Undergo Iridectomy / Iridotomy?

How do you Prepare before Iridectomy?


Routine Tests: Patients undergoing a surgical iridectomy may need the following tests to be done. Specific Tests: The routine tests are followed by tests that are specific to the eye condition, which involve detailed examination of the eye. Two tests are of particular importance and are briefly highlighted below: Patients who are scheduled to undergo laser iridotomy do not require any special preparation for the procedure.

Procedure for Laser Iridotomy: In laser iridotomy, the ophthalmologist uses a laser, (Nd:YAG laser) to punch a tiny hole (0.5 mm) in your iris, through which the aqueous humor can drain. First, the doctor will put some drops of a drug called pilocarpine in your eye, which will constrict the pupil. This is followed by adding some local anesthetic drops for numbing the eye. You will be made to sit comfortably in a special chair, with your head resting on a support to prevent any movement. Then the laser is used to make the opening in the iris. This will not affect your vision, as the opening is made at the periphery of the iris, usually underneath the eyelid, so that it remains out of view. The laser procedure takes just 5 minutes to complete.

You will be made to lie on the operating table and a sterile cloth with a hole will be placed over your eye so that the eye is clearly visible to the surgeon. The surgeon will use a small microscope and special miniature surgical instruments to make an incision into the cornea, followed by excision of a portion of the iris, usually at the top of the eye on the vertical axis. The corneal wound can be stitched, but is usually self-healing.

You can return home on the same day. You may also be recommended to wear a patch over the operated eye for a few days. Avoid strenuous activity for at least 3 weeks. In the long-term, you should have regular check-ups following an iridectomy for treating angle-closure glaucoma. In case of melanoma too, regular check-ups are a must in order to prevent the recurrence of the tumor.

What are the Risks & Complications after Iridectomy?

The risks and complications of conventional (surgical) iridectomy and laser iridotomy overlap to some extent. However, there are also some complications that are specific to each of these two procedures. These are briefly listed below:

What is the Prognosis of an Iridectomy?

The prognosis or outlook of a conventional iridectomy or laser iridotomy is generally very good. In the long-term, the intraocular pressure (IOP) is lowered. In case of melanoma, which has a slow growth rate, if promptly treated, the survival rate can be as high as 95-97% after 5 years. 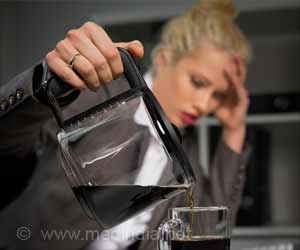 Reducing Caffeine Helps Prevent Glaucoma
High caffeine consumption on daily basis may increase the three-fold risk of glaucoma for those with a genetic predisposition to higher eye pressure.
READ MORE