What is Distal Radius Fracture?

The larger of the two bones of the forearm is known as radius. The end of the arm towards the wrist is called the distal end. When the area of the radius near the wrist breaks, it results in fracture of the distal radius, which is a common type of bone fracture. It usually occurs about 1 inch from the end of the bone. Since it is close to the wrist joint, this type of fracture is often called as wrist fracture.

Distal radius fracture is one of the most common fractures seen by orthopedic surgeons with an incidence of 195.2/100,000 persons per year. It could result in significant financial burden for the patient. 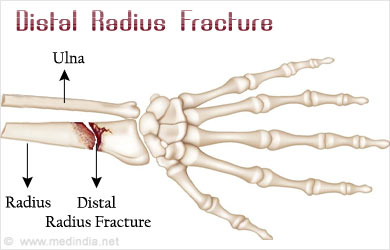 These fractures have varied patterns, so a single form of treatment usually does not apply. Depending on the nature and location of this fracture as well as multi-directional forces we exert on this joint in our daily lives, surgery is often required to restore proper anatomic alignment of the bone.

Colles fractures are the most common type of distal radius fractures, in which the broken fragment of the radius tilts upwards and occurs when falling on an outstretched hand. This fracture was first described in 1814 by an Irish surgeon and anatomist, Abraham Colles and hence the name "Colles" fracture.

It is seen in all adult age groups and particularly in patients with osteoporosis and in elderly women. Studies have shown a strong relationship between Colles fractures and osteoporosis; so much that when an older male patient presents with a Colles fracture, he should be investigated for osteoporosis because of an increased risk of a hip fracture.

It has been generally observed that younger patients suffer Colles fractures due to a high impact trauma or fall (contact sports, skiing, horse riding etc). To diagnose this kind of fracture, plain x-ray films are usually sufficient, however if there is concern of intra-articular extension then CT is also performed.

Smith fractures are also known as a Goyrand fracture. They are caused when the hand is flexed forward under the wrist. Since they are caused by the opposite mechanism these fractures are extra-articular transverse fractures or reverse Colles fracture. Smith fractures account for less than 3% of all fractures and occur from a fall onto a flexed wrist or a direct blow to the back of the wrist. The X-ray of a Smith's fracture looks quite similar to a Colles fracture other than the displacement showing anteriorly instead of posteriorly. The fracture may be extra-articular, intra-articular, or juxta-articular (called types I, II and III respectively). It can generally be treated with closed reduction and cast application.

Barton's fracture is an intra-articular fracture of the distal radius with dislocation of the radiocarpal joint usually caused by a fall on an extended and pronated wrist increasing carpal compression force on the dorsal rim with dislocation of the radiocarpal joint. There are two types of Bartons fracture: dorsal and palmar. It is seen that the history of the fracture is same as for Colles' and Smith's fractures and that there are chances of entrapment of tendons and/or the ulnar nerve. 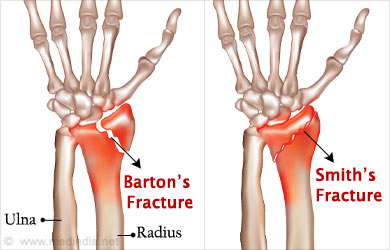 Chauffeur's fractures, also known as backfire fracture or a Hutchinson fracture, is a type of fracture of the radial styloid process caused by a direct blow to the radial aspect of the wrist. The name originated from chauffeurs who got these injuries when the car back-fired while trying to hand-crank the car to start. The back-fire reportedly forced the crank backward into the chauffeur's palm which in turn produced styloid fracture. It can also result during sudden deceleration of the vehicle when you are driving and your hands are on the steering wheel.

Greenstick fracture is a fracture common in children; either the bone is broken or distorted, but the periosteum generally remains intact. It could be classified as greenstick fracture of the distal radius and ulna or greenstick fracture of mid-third of radius and ulna. It is advisable to check the integrity of both proximal and distal radioulnar joints when only one bone is broken. One of the common complaints is recurrent deformity within the cast. Reduction is a process in which slow, constant pressure is applied over a period of 5 to 7 minutes to reduce the deformity and is done until the intact dorsal cortex is broken, since failure to break the cortex could potentially result in increasing deformity while the child is in the cast.

Patients with distal radius fracture generally experience a sharp, intense wrist or forearm pain at the time of injury, sometimes to the extent that the patient has to cradle the affected arm so as to protect the wrist. Pain is usually felt on the thumb side of the wrist and forearm. The pain at the site of injury is particularly noticeable at night or early in the morning. Some patients experience swelling and pain upon touching or pressing of the affected region of the bone. The intensity of the pain could increase when doing certain movements of the wrist like lifting, gripping or during weight-bearing activity through the affected wrist. In cases where the radius fracture is severe with bone displacement, a deformity may be detected.

Depending on the nature of the fracture, your age and your daily activity level, your physician would suggest different treatment options.

A plaster cast is generally applied if the broken bone is in a good position until the bone heals. However, if the position of the bone is out of place, then it becomes imperative to re-align the broken bone fragments. In medical terms, this process is called "Reduction" in which the doctor moves the broken pieces into place. Once the bone is correctly aligned, a splint or cast may be placed on the arm. Generally a splint is usually used for the first few days to take care of some amount of normal swelling. A cast is then added after few days once the swelling goes down. 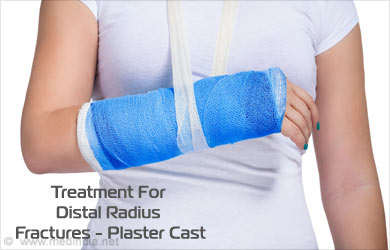 Usually a 45° dorsal tilt can be highly functional in a patient who would be required to drive a car and is active out of home. Such patients have a wrist which is unsightly with a prominent ulnar head and generally has little supination and flexion, but they do not have symptoms with activities of daily living.

If the position of the bone is such that it cannot be corrected with a cast and interferes with your daily functioning, then your physician would recommend a surgery to be done. During the surgery, an incision is made to directly access the bones which are broken. Generally a cast, metal pins, plate and screws or a stabilizing frame (external fixator) are used outside the body to hold the bones in correct position till they heal.

In case of open fractures, surgery is typically recommended within 8 hours of injury. The exposed soft tissue and the bone is cleaned thoroughly and the patient is given antibiotics to prevent infection. The physician would apply a temporary external fixator if the soft tissues around the fracture are badly damaged and internal fixation with plates or screws could be used during a second procedure several days later. 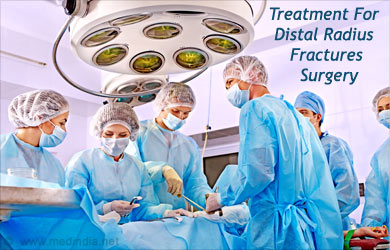 The following are the recommendations issued by the American Academy of Orthopedic Surgeons (AAOS) on the clinical guideline on the treatment of DRFs:

Flexion and extension are considered as natural movements of the wrist to decrease and increase respectively the angle of the wrist joint in relation to the forearm. In this method, you need to place your forearm stationary on a table and your hand hanging over the edge, then slowly and gently you need to bend your wrist down until you feel a minor stretch. This is done for about five seconds, then return to the starting position and bend your wrist upward until you feel another stretch. If you can do this entire exercise with your palm up, it would target the flexors and if you do it with your palm down, it targets the extensors.

The wrist joint has the ability to bend from side to side. In this form of exercise, you need to rest your forearm on a table and turn your hand to the thumb side. After holding in this position for about five seconds, return to the starting position. Turn your hand to the little-finger side and hold for five seconds. It is recommended to perform three sets of 10 repetitions each. 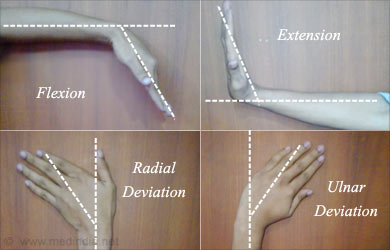 Some of the most commonly recommended products by physiotherapists to speed up healing and recovery are slings, sports tape, compression bandages, ice packs, heat packs, wrist braces, resistance band for strengthening exercises and TENS machine for pain relief.

Distal radius fracture could be debilitating and treatment for acute fracture is decided after a mutual communication between the patient and physician of the available treatments and procedures. Once the patient has been informed of available therapies, a decision can be made, whether surgery is required or non-surgical options are feasible. Further research is warranted to ascertain proper care post-surgery, however till then it is recommended that patients should be under the care of a physical therapist for proper education and a good exercise program.

Colle's Fracture Colles fracture or broken wrist is a wrist fracture, which occurs within an inch of the wrist joint. Colles fracture involves the forearm bone's distal end of the radius.

Scaphoid Fracture of The Wrist The scaphoid is a small wrist bone. Scaphoid bone fractures usually occur when a person falls heavily on the palm of an outstretched hand.

Fracture A fracture is a condition where the continuity of the bone is lost. Majority of bone fractures occur because of high force impact or stress on a bone.
Sign up for Wellness Consult a Doctor Sign up for Selfcare
Advertisement
Health Topics A - Z
A B C D E F G H I J K L M N O P Q R S T U V W X Y Z

How to Choose the Best Eczema-Friendly Moisturizer for Children?
View all
Advertisement
Distal Radius Fracture - Related News
Research may Explain Fractures in Some Who Take Osteoporosis Drugs
Skeletal Defect Leads to Increased Fracture Risk Among Diabetics
Understanding the Complexity of Fracture Epidemiology in Diabetes
More News