Medindia » Health Information » How Do Viruses Mutate and Why Does it Matter?

What do Mutations Mean?

Every living organism on the earth contains a genetic material of its own that carries information about the multiplication, development, and behavior of the organism. Most organisms have DNA as their genetic material, while some viruses have RNA.

Why do Mutations Happen?

The evolution of all living organisms involves the generation of genome variants. Virus genome variants arise due to mutations and new gene arrangements.

A vast majority of them are deleterious and do not survive, but a few provide an advantage in a particular niche. If a mutation provides a survival advantage to the virus, that mutated version becomes the dominant strain.

The words mutation and variant are sometimes used interchangeably, but they have separate meanings. mutation is a single change in the genetic material of the virus, whereas a variant refers to the genome of the virus, which may contain one or more mutations. 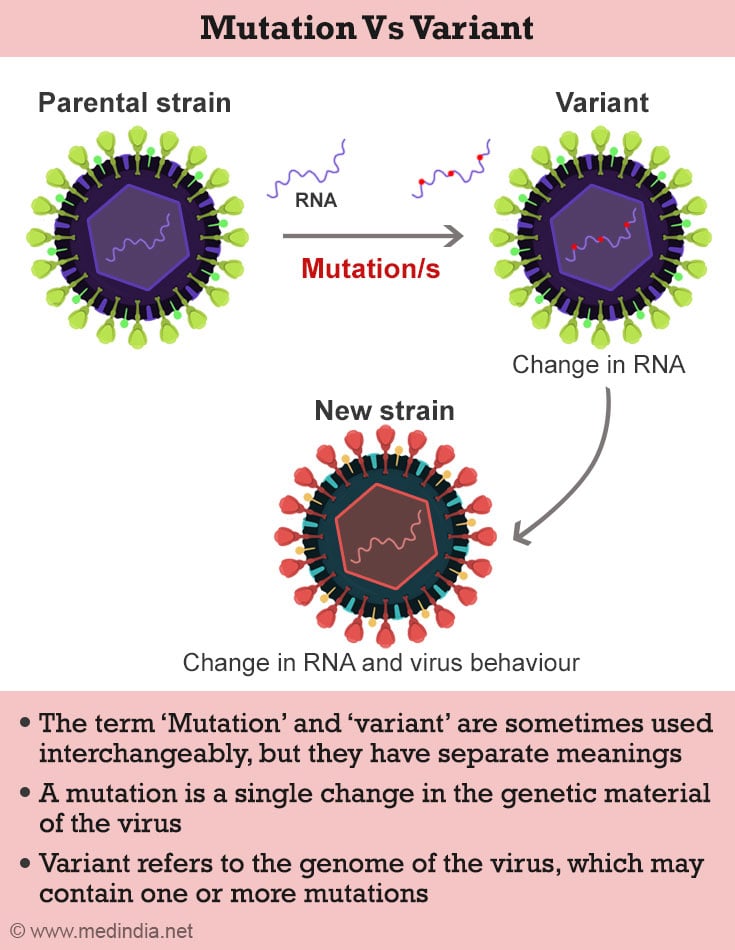 How do These Mutations Occur in Viruses?

Genetic materials undergo molecular processes to create functional protein products out of them. These proteins help in every part of the growth and development of organisms.

In one such process, genetic materials try to make copies of themselves. While making copies, they make some errors that cause modifications in the resulting proteins.

In viruses, mutations occur primarily because of these types of copying errors. The mutations that survive are those that best fit the virus for its continued survival.

Why do the Type and Rate of Mutations Differ between One Virus and the Other?

Viruses have different selection pressures and constraints on the evolutionary process. Here are some important features that make viral mutations peculiar.

1. Immune response of the host

Viruses have specific structures on them, which makes them infectious against a type of host. Those particular regions that are targets for neutralizing antibodies tend to mutate easily. This helps viruses escape the immune response triggered in host cells.

Some virus attachment proteins must retain the configurations that enable them to bind to cell receptors. Thus, they do not mutate often.

3. Viruses with more than one host

Such viruses undergo a mutation that enhances their multiplication in the insect host only if the mutation does not compromise its ability to replicate in the animal host and vice versa.

When virus DNA genomes make copies of themselves, the error rates are much lower than when RNA genomes replicate themselves. This is because the former have some proofreading mechanisms that correct most errors, whereas the latter has no such thing. As a result, DNA viruses mutate much more slowly than RNA viruses.

Is this What Happens with SARS-CoV-2?

Like all other viruses, SARS-CoV-2 also goes through mutations throughout their lifespan.

SARS-CoV-2 is an RNA virus. Thus, the chances of undergoing mutations are higher for this virus. Since it was first discovered, SARS-CoV2 has been acquiring two mutations in its genome every two weeks. While this may sound like a lot to us, the virus that causes the common cold mutates much faster than SARS-CoV-2. 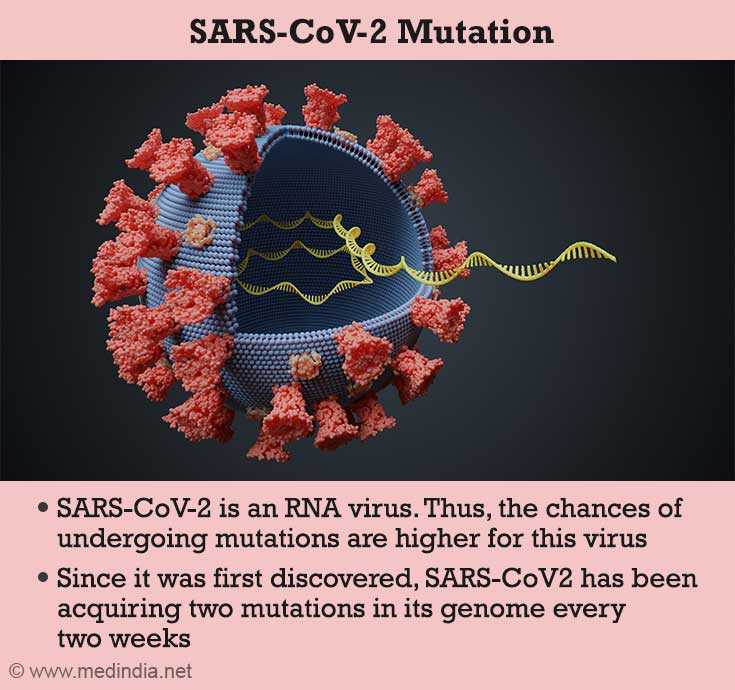 A US government SARS-CoV-2 Interagency Group (SIG) developed a Variant Classification scheme that defines three classes of SARS-CoV-2 variants: Variant of Interest, Variant of Concern, and Variant of High Consequence.

Of these, only the variant of concern refers to a virus strain for which there is evidence of an increase in transmissibility, more severe disease (e.g., increased hospitalizations or deaths), and a significant reduction in neutralization by antibodies generated during previous infection or vaccination, reduced effectiveness of treatments or vaccines, or diagnostic detection failures.

Table 1. Describing the attributes of SARS-CoV-2 variants of concern

Virus mutations happen quickly over weeks to months due to the high number of viruses and hosts (people) out there.

Do you wish to consult a Microbiologist for your problem? Ask your question

Double Mutant Strain of Coronavirus Worsens the Second Wave Of COVID-19 in India
Double mutant strain (E484Q and L452R)- a new and highly infectious strain of coronavirus, is currently presenting a grave concern towards increased infectivity in India.

Parenting Guide: Can Third Wave Affect Children?
Covid-19 third wave: There is no evidence that the third wave will affect only children. However, parents should prepare for the worst until Covid-19 pandemic is over. So, the best way to protect your child is to follow the preventive measures.

How Do Viruses Mutate and Why Does it Matter? - Related News
Women With a Specific Gene Mutation Face Higher Risk of Dying from a Type of Breast Cancer
Genetic Screening for Inherited Mutations Could Benefit Men With Metastatic Prostate Cancer
Mitochondrial Mutation Ups Diabetes Risk in Japanese Men
More News

Find a Hospital Pregnancy Confirmation Calculator Drug Side Effects Calculator Daily Calorie Requirements Sanatogen Indian Medical Journals Diaphragmatic Hernia How to Reduce School Bag Weight - Simple Tips Post-Nasal Drip Turmeric Powder - Health Benefits, Uses & Side Effects
This site uses cookies to deliver our services.By using our site, you acknowledge that you have read and understand our Cookie Policy, Privacy Policy, and our Terms of Use  Ok, Got it. Close