Workers trudge through foul-smelling mud in a trench seeping with clean drinking water and raw sewage in one of the Harare neighbourhoods hardest hit by last year's cholera epidemic.

The repair work is a race against time to patch the city's sewage system before the rainy season begins in November, when health workers fear the water-borne disease could erupt again. 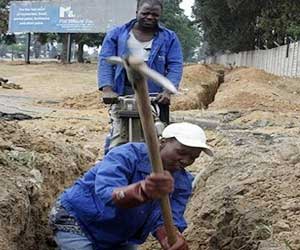 Workers trudge on October 14, 2009 through a foul-smelling mud in a trench seeping with clean drinking water and sewage 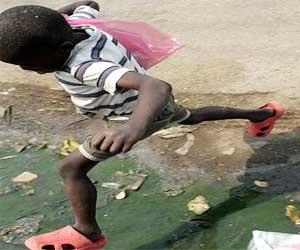 A young boy jumps over a stream of open sewerage along a street in Highfields a surburb Harare on October 14, 2009. 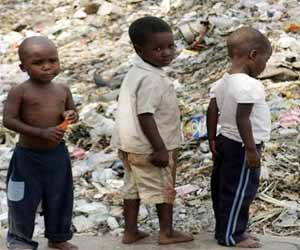 A group of young boys plays near a dumpsite along a street in Highfields surburb Harare on October 14, 2009

The three-metre (10-foot) deep trench cuts through Usuf Austin's driveway and runs the length of his block, forcing his family to leap across the hole to get into their house.


But he's happy for the crew to replace the leaky pipes blamed for fueling the epidemic that killed more than 4,200 people and sickened nearly 100,000.

"This sewage water mixes with the rain water during the rainy season," he added.

The country's collapsing public infrastructure added to chronically overburdened sewer systems and water shortages. This in turn gave free rein to the diarrhoeal disease, which is easily preventable with clean water and proper sewage but thrives in places without proper sanitation.

The crew on Austin's road is one of dozens tearing up streets around the Zimbabwe capital, including much of the city centre, in a donor-funded drive to fix the worst of the sewer problems.

Raw sewage still trickles along street sides in working class neighbourhoods like this one, but the onset of rains could easily turn it into streams.

The work is gruelling under Zimbabwe's tropical sun, as the crew use pick axes and shovels to dig the trenches by hand, without protective gloves or masks.

"We have to go to the houses to ask for gloves, even shovels," said Titus Sibanda, 35, the crew's foreman. "All the people on these streets, they help us."

Zimbabwe declared an end to the cholera epidemic at the end of July, and only five cases have been reported since then, in a rural district where periodic outbreaks are common.

What distinguished last year was its epicentre in Harare, which accounted for most of the victims.

Residents of the capital had been used to reliable, clean drinking water and had never had to take cholera precautions.

But leaky pipes left raw sewage seeping into the water supply. Mounds of rubbish, accumulating by the day, have also become a common landmark on the outskirts of most poor suburbs as authorities lack fuel or spares to keep dump trucks on the road.

Zimbabwe's economic meltdown last year left hospitals and clinics without money for basic medicines and supplies, while doctors and nurses went on strike to demand their wages.

The result was the worst cholera epidemic anywhere in the world in more than a decade.

Most of the response was led by aid agencies, who shipped in water treatment tablets and medicines, and set up emergency cholera clinics.

The UN Children's Fund has warned that a new outbreak is "almost inevitable" when the rainy season begins in November, as an estimated six million people have little or no access to safe water and sanitation, the main driver of cholera.

"Unfortunately we do believe that cholera has become endemic within Zimbabwe," UNICEF's chief of health Mickey Chopra said recently.

"There's not been enough time to repair that infrastructure, so we are preparing for a cholera outbreak in the rainy season."

But Health Minister Henry Madzorera said Zimbabwe is better prepared this year. Doctors and nurses are back on the job, so clinics are running again. Education campaigns have highlighted the importance of boiling water, washing hands and other prevention measures.

"You'll notice in Harare there is a lot of excavation happening. The water supply is going to improve," he told AFP.

"We encourage people to take hygiene measures," he said. "But the rainy season is coming, we may have a few problems."

All the pipes that need replacing will never be fixed before the rains, the crew foreman in Highfields said it's important for the public to see efforts are being made.