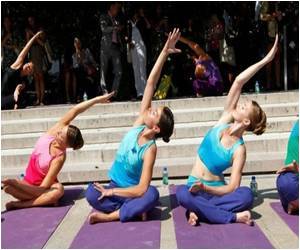 Dr. Helen Lavretsky, professor of psychiatry at the UCLA Semel Institute for Neuroscience and Human Behavior, and colleagues report a further benefit as well: a reduction in stress-induced cellular aging.

The report appears in the current online edition of the International Journal of Geriatric Psychiatry.


As the U.S. population continues to age over the next two decades, the prevalence of dementia and the number of family caregivers who provide support to these loved ones will increase dramatically. Currently, at least five million Americans provide care for someone with dementia. The detrimental burden on them, in terms of their own lives, can be severe.
Advertisement
For example, says Lavretsky, who also directs UCLA's Late-Life Depression, Stress and Wellness Research Program, "We know that chronic stress places caregivers at a higher risk for developing depression. On average, the incidence and prevalence of clinical depression in family dementia caregivers approaches 50 percent. Caregivers are also twice as likely to report high levels of emotional distress." What's more, many caregivers tend to be older themselves, leading to what Lavretsky calls an "impaired resilience" to stress and an increased rate of cardiovascular disease and mortality.

While medication can improve depression, many caregivers may be opposed to the use of medication because of the associated cost and drug side-effects. That consideration motivated Lavretsky and her colleagues to test a brief mind-body intervention for stress reduction.

The researchers also found that meditation increased telomerase activity and thus slowed cellular aging. Telomerase is an enzyme that maintains the DNA at the ends of our chromosomes, known as telomeres. Telomeres are associated with a host of health risks and diseases, which may be regulated in part by psychological stress. In the absence of telomerase activity, every time our cells divide, our telomeres get shorter and shorter, until eventually, they become so short the cells die. If high telomerase can be maintained or promoted, though, it will likely promote improvement in telomere maintenance and immune cell longevity.

In the study, the meditation group showed a 43 percent improvement in telomerase activity compared with 3.7 percent in the relaxation group.

"Although the relation between mental and physical health has been previously documented, the mechanistic links are beginning to be understood at the cellular level," said Lavretsky.

"To a varying degree, many psychosocial interventions like this have been shown to enhance mental health for caregivers," she said. "Yet given the magnitude of the caregiver burden, it is surprising that very few interventions translate into clinical practice. The cost of instruction and offering classes may be one factor. Our study suggests a simple, low-cost yoga program can enhance coping and quality of life for the caregivers."

The pilot results were "striking," she said, given the improvements that were shown in mental health, cognition, and telomerase activity over a short eight weeks at a mere 12 minutes a day. "We found that the effects on cognitive and mental functioning and telomerase activity were specific to the Kirtan Kriya. Because Kirtan Kriya had several elements of using chanting, mudras (finger poses) and visualization, there was a 'brain fitness' effect in addition to stress-reduction that contributed to the overall effect of the meditation." Lavretsky plans a follow-up study to provide further confirmation of this potential mechanism in a neuroimaging study of Kirtan Kriya.

Recently, UCLA launched its new Alzheimer's and Dementia Care Program, which provides comprehensive, coordinated care as well as resources and support to patients and their caregivers. Lavretsky has incorporated yoga practice into the caregiver program.