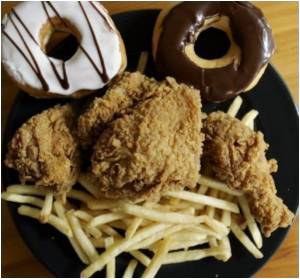 The study of nearly 1,000 men and women provides the first evidence linking dTFAs with adverse behaviors that impacted others, ranging from impatience to overt aggression. The research, led by Beatrice Golomb, MD, PhD, associate professor in the UC San Diego Department of Medicine, has been published online by PLoS ONE.

High fat diets have been linked with colon cancer risk, but now researchers have found a reason why.
Advertisement


The UC San Diego team used baseline dietary information and behavioral assessments of 945 adult men and women to analyze the relationship between dTFAs and aggression or irritability. The survey measured such factors as a life history of aggression, conflict tactics and self-rated impatience and irritability, as well as an "overt aggression" scale that tallies recent aggressive behaviors. Analyses were adjusted for sex, age, education, and use of alcohol or tobacco products.

Teen violence is recurring at an alarming pace worldwide. India too is becoming a victim to such a disturbing trend. Psychiatrists counsel sufficient family and community support.
Advertisement
"We found that greater trans fatty acids were significantly associated with greater aggression, and were more consistently predictive of aggression and irritability, across the measures tested, than the other known aggression predictors that were assessed," said Golomb. "If the association between trans fats and aggressive behavior proves to be causal, this adds further rationale to recommendations to avoid eating trans fats, or including them in foods provided at institutions like schools and prisons, since the detrimental effects of trans fats may extend beyond the person who consumes them to affect others."

View of How Fatty Foods Make You Feel Less Sad

There is an intimate relationship between emotional state and food intake, it has been demonstrated.
Advertisement
<< Yoga Improves Quality of Life for Caregivers
Sleep Apnea Treatment Protects Heart >>

Fat Deficiency May Lead to Other Disorders