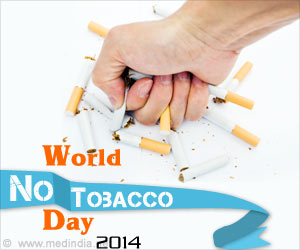 That visit to the doctor in Delhi was an eye opener for Abhigyan's (name changed) 70-year-old father. The doctor said he was not able to get rid of his incessant coughing due to his smoking habit. Not only this, the X-ray showed that his lungs were shrinking because of which he was put on regular use of inhalers.

From that day, he stopped smoking. He learnt his lesson before it got too late. Wish other tobacco users could get a cue from this and give up tobacco consumption before it becomes life threatening.

WHO and World No Tobacco Day


To educate people about the risks attached with tobacco use, the WHO has declared May 31 as World No Tobacco Day. The Day aims to protect the present and future generations from the harmful health consequences related to tobacco use and its smoke.
Advertisement
For World No Tobacco Day 2014, the WHO decided on the theme Raise taxes on Tobacco.

According to Mr Benoy Mathew, Media Officer, Voluntary Health Association of India, though taxation on tobacco products was very low till few years ago in India, states are playing an active role through taxation. Rajasthan, which leads all the states, levies 65 per cent value added tax (VAT) on tobacco products which has been very effective in bringing down consumption.

The WHO has set specific goals for 2014. It wants governments of the countries to increase taxes on tobacco to such an extent that it automatically decreases tobacco consumption.

It also wants support from individuals and civil society organisations in its endeavour to protect the society from the evils of tobacco consumption.

Impact of Taxation on Tobacco Consumption

As per a study, the number of smokers in India has gone up. The figure stands at 110 million compared to just 74.5 million smokers over three decades ago.

"In India, tax on bidis is very low which should go up in order to reduce its consumption among low-income groups. And taxation should be uniform on all tobacco products," said Mathew of Voluntary Health Association of India. He informed that 12 states have levied VAT on tobacco, though more is needed to be done by the Central government. Jammu and Kashmir increased its VAT on tobacco products from 20 per cent to 40 per cent. Mathew said the step helped in cutting down sales and the additional revenue is used in cancer hospitals.

Keeping the influence of taxation on tobacco consumption, India Health Minister Harsh Vardhan has announced that he is planning to levy higher taxes on tobacco products to discourage its consumption. The minister can see the example of United States.

When US President Barrack Obama brought about a tax hike on cigarette, its price went up by 22 per cent. And the result was overwhelming. There was a long-term decline in smoking. As per surveys by the Centers for Disease Control and Prevention, US, about 3 million fewer people smoked in 2010 than in 2009. Teen smoking also immediately fell 10 per cent to 13 per cent, says researcher Jidong Huang of the University of Illinois at Chicago.

Scientists from the charity Cancer Research UK have revealed in 2014 that by increasing tobacco tax four times globally, smoking can be cut down by a third and this can eventually prevent 200 million premature deaths this century from lung cancer and other diseases.

Mathew feels that voluntary organisations can play a vital role in reducing tobacco consumption and saving thousand of lives. He said, "These organisations need to work closely with the government. They can help in sensitising and training police officials who enforce the laws. The laws need to be enforced more stringently and the organisations can train the students how not to get attracted to enticing advertisements and packaging of tobacco products."

According to a report on Economic Burden of Tobacco Related Diseases in India, released by Public Health Foundation of India, the total economic costs that attributed to tobacco use from all diseases in India in 2011 was Rs 1,04,500 crore.

The highest burden due to tobacco use was from cardiovascular diseases which amounted to Rs 3,600 crore of direct medical and indirect morbidity costs. The second rank was bagged by respiratory diseases amounting to Rs 2,800 crore, while tuberculosis amounted to Rs 2,300 crore and cancer amounted to Rs.1,400 crore.

Tobacco Use and Women

A study by the Institute of Health Metrics and Evaluation revealed that India had 12.1 million women smokers in 2012, compared to only 5.3 million in 1980. And this accounted for more women smoking in India than any other country except the US.

The startling fact is that this number has gone up in spite of women being aware of the risks attached to this habit.

Researchers from the US National Cancer Institute, Maryland, have revealed that postmenopausal women who smoke had 19 per cent more chance of getting breast cancer compared with women who never smoked. And a study says that even young women who smoke face an increased risk of a common type of breast cancer. Researchers found that women between 20 and 44 years old who had smoked a pack of cigarettes daily for at least 10 years had 60 per cent more chance to develop so-called oestrogen receptor-positive breast cancer than those who smoked less.

Apart from different types of cancers, smoking increases chance of infertility among women and to-be-mom smokers can become a cause of trouble for their babies as these children can have ear aches and respiratory problems.

Rise of Use of E-cigarettes Among Teens

Last year, the WHO wanted to put e-cigarettes in the category of regular tobacco products under the Framework Convention on Tobacco Control. But a group of 53 leading scientists had warned the WHO not to take such a step, saying that e-cigarettes were a good opportunity to slash disease and deaths caused by smoking.

But a new study has revealed that teens who have tried electronic cigarettes may be more likely to smoke regular cigarettes. The researchers concluded after analysing smoking habits of about 38,000 middle school and high school students using data from US Centers for Disease Control and Prevention's National Youth Tobacco Survey.

Mathew added that the number of teens taking to smoking has gone up as the tobacco industry effectively targets youth and has also been successful in a way in wooing them. To counter this influence, he said that school health promotion programmes should be taken up at state level and laws should be properly enforced.

As per WHO figures, tobacco kills around 6 million people annually and the number is expected to go up above 8 million annually by 2030 if no step is taken to cut down this life-threatening habit.

Cigarette smoking, which causes about 1 in every 5 deaths in the United States each year, harms the heart, blood vessels, lungs, eyes, mouth, reproductive organs, bones, bladder and digestive organs. But the chemicals in tobacco smoke are most harmful for heart and blood vessels and they are major cause for tuberculosis, heart disease and death related to it.

Various carcinogens in the cigarette smoke cause cancer of different organs such as lungs, oral cavity, oesophagus, larynx, mouth, throat, kidney, liver, bladder, pancreas, stomach, cervix, bowel and also acute myeloid leukaemia. Passive or second hand smoking is when a non-smoker breathes other people's smoke and this also poses same risks to them.

New US Plan to Regulate E-Cigarettes
The soaring $2 billion market in e-cigarettes which is presently free from federal oversight will .....