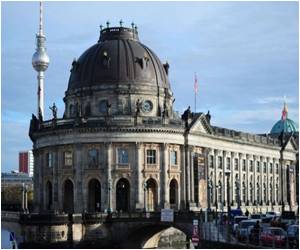 Paintings and gold icons from Russia's art museums will be now placed in an old tobacco factory in Spain.

The southern Spanish city of Malaga, home to thousands of Russian expats, has signed an agreement to host the first overseas branch of Saint Petersburg's State Russian Museum.

"Works displayed in Malaga will range from Byzantine-inspired icons to social realism of the Soviet era," Malaga city hall said in a statement.


The new museum is scheduled to open in early 2015.

The State Russian Museum -- not to be confused with Saint Petersburg's State Hermitage Museum -- will send about 100 works on permanent loan, including paintings by Kandinsky and Chagall.
Advertisement
It will also send about 60 works each year for temporary exhibitions under a 10-year preliminary agreement.

They will go on show in 2,300 square metres (2,750 square yards) of exhibition space in La Tabacalera, a 1920s tobacco factory that already houses an automobile museum.

A Malaga city hall official told AFP on Wednesday it was too soon to say how much the new museum would cost.

A major tourist sunspot with half a million inhabitants on Spain's Costa del Sol, Malaga has spent millions on developing its cultural scene over the past decade.

It was the painter Pablo Picasso's native city and since 2003 has housed a major museum devoted to his work.

In November, Malaga city hall said France's Pompidou Centre, home to one of the world's top collections of modern art, had agreed to open a branch there in 2015.

The city said at the time it would spend five million euros ($6.8 million) to renovate a venue for a permanent display of 70 works from the Pompidou.

Auschwitz Museum Launches Online Holocaust Awareness in Arabic and Farsi
At the site of the former Nazi German death camp in southern Poland, the Auschwitz museum said that ...