Workers Twice as Likely to Die Earlier Than Their Bosses 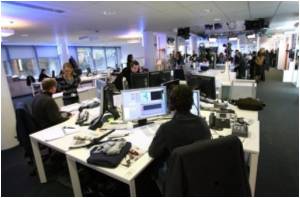 Working class men, the ominous results of a new UK study reveal, are more than twice as likely to die earlier than their bosses.

The Office for National Statistics suggests that scaffolders, farm workers, bus drivers, labourers and cleaners are at more than double the risk of early death than workers including local and national government officials, civil engineers, doctors, teachers, social workers or nurses, reports the Daily Express.

A new UK survey has shown that most employees prefer to work under a male boss.
Advertisement

The study has also shown that there were improvements in the mortality rates of all classes between 2001 and 2008.


However, the gap between managers and manual workers has widened.

In 2001, a worker in a routine or manual occupation was twice as likely to die before the age of 65 than his manager.

Frustrated Aussie workers are now using their iPhones to vent out anger at their bosses, thanks to applications that allow them to snap and mutilate a photo of their subject.
Advertisement
But in 2008 that ratio had risen to 2.3 times as likely.

This is the first time Britain's new annual comparative death rates have been published.

A spokesperson for the Health and Safety Executive said: "It's clear that health and safety of workers in some industries is more at risk than in others. It's important that organisations take their responsibilities for the safety of their staff seriously."

ONS head of analysis, Myer Glickman, said: "The figures give a much more up to date picture of health trends. They will be invaluable in monitoring social inequalities."

Boss the Robot - Software Superior to Hire and Pay Workers

Have you ever joked that your boss works like a robot? Well, it could soon be a reality, for a web service has been launched that software algorithms to automatically recruit,
Advertisement
<< Travel Hotspots in Asia Pacific: Australia, Japan, China
A Brief Period of Food Indulgence Could Lead to an Ample Wa... >>