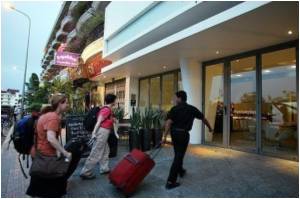 Australia, Japan and China are the most desirable destinations for travelling in the Asia-Pacific, according to an international survey Wednesday.

Seventeen percent named Australia as the country they would most like to visit in the next two years, according to the Asia Pacific Travel Survey 2010, with 16 percent choosing Japan and nine percent preferring China.

"With Australia's great natural beauty and Japan's rich culture and history it is not surprising that one in five people say they would consider visiting these destinations," said Ross Jackson, regional head of cross-border business at payments firm Visa, which co-commissioned the study.


He added that "the all round tourism products" in Australia and Japan "puts them high on any traveller's list."

Australia came top among New Zealanders, Britons, Americans and Japanese, while South Koreans, Taiwanese, Thais and Hong Kongers favoured Japan, said the survey, which was also commissioned by Pacific Asia Travel Association (PATA).
Advertisement
"Travel intention intelligence such as is revealed in this annual survey... is critical for today's destination and product marketers given pressures placed on them to improve returns on investment even as budgets are being squeezed," said PATA chief executive Greg Duffell.

The survey, carried out online in May, asked 6,714 people from 11 Asia-Pacific markets as well as the United States and Britain about their travel plans.

The respondents, all Internet users aged 18 and above, had been abroad on holiday in the past two years or intend to in the next two years.

Greek Tourism Buckles Under Pressure of Strikes and Fuel Shortage
Disaster has struck Greece's crucial tourism industry at the peak of a summer season badly needed .....

Now, Monsoon Tourism Catches the Imagination of People
After medical tourism, monsoon tourism has caught on among people...

Gay Tourism Picks Up in Conservative Mexico City
Mexico City's gay community is gradually turning the capital into a relative oasis in a staunch ......