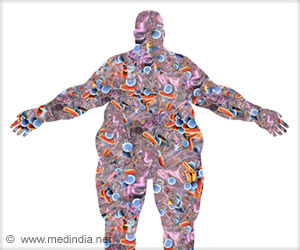 Whole body vibration (WBV) can fight diabetic inflammation effectively, reports a new study. The findings of the study are published in the International Journal of Molecular Sciences.

Whole body vibration can significantly improve how well our body uses glucose as an energy source and adjust our microbiome and immune cells to reduce diabetic inflammation, says a new study.

Advertisement
‘Regular use of whole body vibration (WBV) can shake up the microbiome, and reduce inflammation in diabetes.’
Read More..

The study's findings showed how regular use of whole body vibration can create this healthier mix by yielding a greater percentage of macrophages -- cells that can both promote or prevent inflammation -- that suppress rather than promote.


The researchers, using a mouse model, showed that WBV alters the microbiome, a collection of microorganisms in our body, which help protect us from invaders and, in the gut, help us digest food.
Advertisement
They saw several changes, including increased levels of a bacterium that makes short-chain fatty acids, which can help the body better utilize glucose.

Glucose is used by the body for fuel, but at high levels, it promotes inflammation, insulin insensitivity and ultimately can cause diabetes.

"While there were other changes, the most dramatic they documented was the 17-fold increase in this bacterium called Alistipes, a gut bacterium not typically in high supply there but known to be proficient at making short-chain fatty acids which, in turn, are "very good" at decreasing inflammation in the gut," said Jack Yu, chief of pediatric plastic surgery at Medical College of Georgia, Augusta University.

Alistipes, which helps ferment our food without producing alcohol, generally improves the metabolic status of our gut and makes us more proficient at using the glucose we consume for energy.

The research team reiterated that while no one is certain just how WBV works, but it appears to help address a key concern in diabetes and many common diseases: inflammation.

Diabetes Drugs Can Help Immune Cells in Controlling Inflammation
A common class of drugs used to treat diabetes has been found to exert a powerful check on ......