WHO Says Alcohol Kills One Person Every 10 Seconds Worldwide 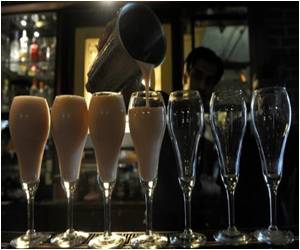 Including drink driving, alcohol-induced violence and abuse, and a multitude of diseases and disorders, alcohol causes one in 20 deaths globally every year, the UN health agency said.

"This actually translates into one death every 10 seconds," Shekhar Saxena, who heads the WHO's Mental Health and Substance Abuse department, told reporters in Geneva.

More people in countries where alcohol consumption has traditionally been low, like China and India, are also increasingly taking up the habit as their wealth increases, it said.

"More needs to be done to protect populations from the negative health consequences of alcohol consumption," Oleg Chestnov of the WHO's Noncommunicable Diseases and Mental Health unit said in a statement launching a massive report on global alcohol consumption and its impact on public health.

Drinking is linked to more than 200 health conditions, including liver cirrhosis and some cancers. Alcohol abuse also makes people more susceptible to infectious diseases like tuberculosis, HIV and pneumonia, the report found.

Most deaths attributed to alcohol, around a third, are caused by associated cardiovascular diseases and diabetes.

Alcohol-related accidents, such as car crashes, were the second-highest killer, accounting for around 17.1 percent of all alcohol-related deaths.

Binge drinking is especially damaging to health, the WHO pointed out, estimating that 16 percent of the world's drinkers abuse alcohol to excess.

While people in the world's wealthiest nations, in Europe and the Americas especially, are boozier than people in poorer countries, rising wealth in emerging economies is also driving up alcohol consumption.

Drinking in populous China and India is rising particularly fast as people earn more money, the WHO said, warning that the average annual intake in China was likely to swell by 1.5 litres of pure alcohol by 2025.

Still, Eastern Europe and Russia are home to the world's biggest drinkers.

Russian men who drink consumed an average of 32 litres of pure alcohol a year, according to 2010 statistics, followed by other Western countries including Europe, Canada, the United States, Australia and South Africa.

On average, every person above the age of 15 worldwide drinks 6.2 litres of pure alcohol in a year, according to the report.

Counting only those who drink though, that rises to 17 litres of pure alcohol each year.

But far from everyone indulges. Nearly half of all adults worldwide have never touched alcohol, and nearly 62 percent say they have not touched a drink in the past year, the report showed.

Abstinence especially among women, is most common in low-income countries, while religious belief and social norms mean many Muslim countries are virtually alcohol free.