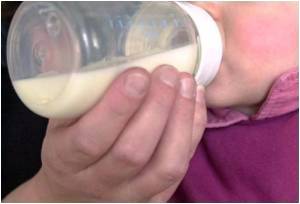 Family doctors and pediatricians can influence when parents wean their children from the bottle, thereby helping to reduce tooth decay, obesity and iron deficiency, a new study by researchers at St. Michael's Hospital and The Hospital for Sick Children has found.

Only five minutes of advice at the nine-month "well baby" checkup about the dangers of prolonged bottle use resulted in a dramatic, 60-percent drop in the number of babies still using the bottle at age two, said Dr. Jonathon Maguire, lead author of the study.

From antibodies, to the exclusive nutrients, the benefits of breastfeeding are incalculable.
Advertisement


"If physicians counsel parents of young infants about the dangers of prolonged bottle use and when to stop using the bottle, the counseling actually works," said Maguire.

Interactive section of Medindia gives details regarding how your body prepares breast feeding
Advertisement
"This shows it's possible for health professionals to positively influence the health behaviour of young children before they develop unhealthy habits and will hopefully lead to healthier children and healthier adults that they become," he added.

"We and others have previously found an association between prolonged bottle feeding (beyond 16 months) and iron deficiency. Iron deficiency occurs in about 30 per cent of Ontario toddlers and is associated with developmental delays, behavioural problems and poorer school achievement, and, in rare cases, strokes," Dr. Patricia Parkin, senior author of the study.

Eighty-six percent of parents whose children were still using the bottle after age two said it was because the child preferred the bottle over the sippy cup.

Maguire said the older the children are, the more difficult it becomes to modify their behaviour.

"By the time they reach two, it becomes very difficult for parents to transition their children away from the bottle. It needs to be done at a younger age when children's behaviour is more easily modified," he said.

The research appears in the current issue of Pediatrics, the leading journal in the field.

Overtime Work for Aussie Women Who was Breastfeeding Baby

The New South Wales Police Force has made an Aussie woman work overtime for every minute she spent expressing breast milk for her child.
Advertisement
<< Hopkins Review Shows, Pediatric Clinical Studies Appear Pro...
The Art of the Complaint Letter Has Been Mauled By Email >>