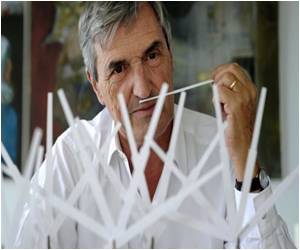 "Peach, rose and cumin" tart by Pierre Herme's is a rollercoaster for the senses by any standard. It is also a nod to a classic fragrance, reinterpreted for the palate by the French pastry chef.

Created in 1944, "Femme" by Rochas is a fruity, musky blend of rose and peach, patchouli and spice, with notes of plum, jasmine, oak moss and sandalwood worked into the heady mix.

How We Select Perfumes Demystified

Study says suggests that rather than selecting perfumes which try to mask our body odor, we select those perfumes which give out a scent similar to our body.
Advertisement

For the edible version, Herme began with a sweet biscuit pastry, garnished with an almond cream infused with rose petals, and fresh yellow peaches dusted with cumin-flavoured sugar for the right balance of fruit, flower and spice.


But he was not alone in taking on the challenge.

For three years, Herme has been exploring the kinship between perfume and cuisine with his friend Jean-Michel Duriez, a "nose" at Rochas and formerly at Patou with whom he co-wrote a book on the subject due to hit shelves in October.

A House Becomes a Home by Smells of Toast, Perfume, Washing Powder

Experts have said that toast, perfume and washing powder are the smells that make a house a home.
Advertisement
Fruit of the same experiment, Hermes' rose and jasmine tart is based on the Jean Patou fragrance "Joy".

"Jean-Michel talked me through the different notes of the perfume, and I took the main ones to create a flavour," explained the 50-year-old chef, best known for his world-famous macaroons, on a visit to his workshop in western Paris.

"I pick up associations of fragrances to turn into flavours, but it is never a literal translation, it's an interpretation."

For "Peach, rose and cumin", Duriez explained how they decided to do without the patchouli, to tone down the muskiness of the perfume.

Herme also took advice from his perfumer friend for a tart called "Infinitely Vanilla", whose light cream works in woody vanilla from Madagascar, a "brash, exuberant" variety from Tahiti and a floral one from Mexico.

The chef started using fragrance as an inspiration a decade ago, working with Guerlain's "Shalimar" and later "Eau Sensuelle" by Rochas.

"The perfumer uses his nose, the patissier his nose and mouth. It's the same idea of marrying scents, like you marry flavours in your mind," he said.

In their book Herme and Duriez explore the bridges between patisserie and perfumery, sibling arts which share classic associations like apple and cinnamon, chocolate and caramel or morello cherry and pistachio.

Leave some eggs with a melon for 48 hours and they will absorb its aroma through the shell, recalling the perfumery process of "enfleurage" by which an oily substance takes on a flower's fragrance as if by osmosis.

For Mathilde Laurent, a "nose" for the luxury house Cartier, there are "very strong parallels between perfume and cuisine."

"The real difference is we have a great many more ingredients than chefs do, a palette that is more abstract, less visual, less inspiring. It all happens in our mind."

"Chefs work with seasonal produce. They have asparagus at a particular time of year. We have benzyl acetate (the main constituent of essential oil of jasmine) all year round," she said.

"We never even get to see many of our ingredients, which can be deeply unattractive," she said. One of her first olfactory revelations as a perfumer was the smell of horse droppings.

"But there is the same obsessiveness. You go over a recipe 400 times until it's right. For me the real creativity is more about how you overcome all the little problems than the initial flash of inspiration."

"Listening to Yannick Alleno -- three star-chef of the Meurice Hotel in Paris -- giving advice on a sauce, it sounded just like a colleague assessing one of his creations," said Laurent, who has worked with a number of top chefs.

For Patrick Jeffroy, a chef from Carantec at the northwestern tip of Brittany, "the nose is like a thermometre. I can tell you from the smell of a broth if it is salty enough."

"We use different techniques to create a dish or a perfume, but deep down it is the same quest, in my case inspired by smells like the sea at low tide, or roasted chestnuts, that I have carried since childhood."

Jean-Claude Ellena, master perfumer at Hermes, recalls what the chef Pierre Gagnaire made of his classic fragrance "Terre d'Hermes": "Fifteen to 20 little dishes, one of them a poultry casserole with straw and tangerine."

To interpret his perfume "Poivre Samarcande", the chef Alain Senderens wanted initially to use violets -- but Ellena had just the tip he needed:

"I told him to use cucumber peelings -- they smell just the same!"

Quiver in Tremor Patients Eased by Alcohol in Perfume

An element in perfume notably assuages symptoms of tremor - an illness affecting one in 25 people over the age of 40, states a new study.
Advertisement
<< Take Vitamins to Reduce Risk of Pancreatic Cancer
Under-35s Britons Favoring Internet Over Radio: Poll >>

Nosebleed
News Archive
News Resource
Advertisement
News Category
Tale of Love Hormones Shaping our Responses to Society How to Reduce Needle Anxiety in Children? Tobacco Addiction: Here's How to Break the Habit Parents are 'Winging It' on Their Kids' Mobile Use Ankle and Ankle Movements While Riding an Hoverboard
More News
Sign up for Wellness Consult a Doctor Sign up for Selfcare

Drug - Food Interactions Find a Hospital Sinopril (2mg) (Lacidipine) Sanatogen Find a Doctor Accident and Trauma Care Post-Nasal Drip Calculate Ideal Weight for Infants Color Blindness Calculator Blood Donation - Recipients
This site uses cookies to deliver our services. By using our site, you acknowledge that you have read and understand our Cookie Policy, Privacy Policy, and our Terms of Use