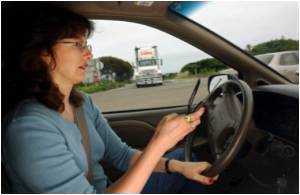 Mobile phones must carry warning labels to alert American drivers that they can be deadly distractions, recommends US Transportation Secretary Ray LaHood.

"We're going to work with our friends in the technology industry to maybe think about, when you go in to buy your phone, maybe there's a big warning label on the box: 'Do not use this device while you're driving,'" LaHood said.

Number of cell phones will exceed this year. EMR from cell phone can damage your health irreversibly, our tips can keep you safe to some extent.
Advertisement

LaHood spoke at the opening of the second US summit on distracted driving, an "epidemic" that killed thousands and injured nearly half a million on US roads last year.


"There's no bigger distraction than people on a cell phone or people texting and driving. There isn't. You can't drive safely doing that," he said.

US experts and lawmakers called Wednesday for tough laws to curb distracted driving, blamed for thousands of deaths and half a million injuries in the United States last year.
Advertisement
The number of deaths and injuries blamed on distracted driving has fallen slightly from 5,870 in 2008 to around 5,500 last year thanks to greater awareness of the problem, legal bans, and stiffer punishments, LaHood said.

"We told Americans to 'click it or get a ticket' and we have seen seatbelt use increase to 85 percent, up over 60 percent in the last 15 years," LaHood told the meeting.

"We have reminded Americans that if they are over the limit, they will get arrested. And although driving under the influence is still a serious problem, we have seen drunk-driving fatalities decline by almost 20 percent between 2006 and 2009," he said.

Since last year, 12 more states have passed laws banning text messaging while driving, bringing the total number of states with such bans to 30. The US capital city, Washington, bans mobile phone use while driving as does the US island territory of Guam.

Eight states prohibit the use of handheld cellphones while driving, while some states ban novice drivers from using a mobile phone when at the wheel.

But a poll conducted in June found that one in four US adults and teenagers admitted to sending text messages while driving, and more than six in 10 adults and four in 10 teens said they have talked on the phone while driving.

"Most of all, each one of us needs to take personal responsibility. When you buckle up, put the cellphone and the Blackberry in the glove compartment," said LaHood.

The transportation secretary also announced other measures to reduce distracted driving, including a ban on texting for drivers of trucks carrying hazardous materials, a regulation prohibiting train operators from texting, and a law banning commercial bus and truck drivers from texting on the job.

"You know about the accident in California -- 28 people were killed because a train driver was texting and driving. There's no excuse for that," said LaHood.

"Distracted driving is unsafe, irresponsible, and in a split second, its consequences can be devastating," said LaHood.

"Its victims aren't statistics," he added. "They are moms and dads, sons and daughters, the men and women in this audience who have planned funerals instead of birthdays or weddings."

Talking on cell phones can be more distracting for drivers, than conversing with a passenger, says a new study.
Advertisement
<< Dogs Improve School Grades in Germany
'Dry Water' To Fight Global Warming >>

Yakking on Cell Phones Not Conducive to Good Driving

Post-Nasal Drip Accident and Trauma Care Find a Hospital Find a Doctor Nutam (400mg) (Piracetam) Iron Intake Calculator Blood - Sugar Chart Blood Pressure Calculator Pregnancy Confirmation Calculator A-Z Drug Brands in India
This site uses cookies to deliver our services.By using our site, you acknowledge that you have read and understand our Cookie Policy, Privacy Policy, and our Terms of Use  Ok, Got it. Close
×