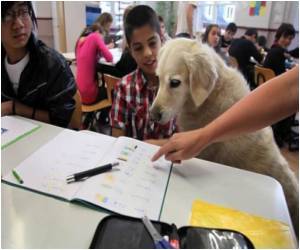 Dogs have, in several ways, lived upto their reputation of being man's best friend, and yet another way that German schools have discovered is they improve pupils' work quality and grades.

Despite a grainy, grey September morning, the mood is upbeat in a class in Karlsruhe in south-western Germany: and that's largely because Paula -- a six year-old Golden Retriever -- is here.

Having Pets Improves Your Overall Health

Having pets may reduce the overall risk of an individual developing heart disease and will also reduce high blood pressure.
Advertisement

"Paula, come here," the students cry out one by one as she brings them question papers strewn on the floor. The papers have cork caps so that the canine can access them easily.


Each student pats Paula when she fetches them a paper and rewards her with a croquette.

"Its a pleasure to go to the blackboard, even for maths," said Meryem, a 12-year-old.

Dogs are Treated Just Like Kids by City Folks

Deep attachment and love forms the basis of relationship among city folks with their pets,especially if the pet is a dog,research has revealed.
Advertisement
"We are all responsible for the dog," added Sergen, 13.

"We cannot disturb her when she is in her corner, we cannot throw things on the floor because she might eat them and we have to see that there is always water in her bowl," he added.

Some parents were sceptical at the start, said teacher Bettina Brecht who has been bringing her dog to the classroom for the past five years.

But Paula has convinced the doubters, she said.

"A dog breaks the ice between teacher and pupil," Brecht said, adding that she had also helped boost the students' confidence.

Dogs are being brought into some German schools since the end of the 1990s and there are about 120 institutions welcoming canines. They range from primary schools right up to high schools, said Lydia Agsten.

Agsten, who teaches handicapped children at a special facility near Dortmund, however said the figure was an estimate as this phenomenon was not officially recognised in the German educational system.

But some say there is no clear link between canine presence and better grades.

"For the present there is nothing to definitely show that dogs have an impact on students' progress," said Susanne Wille, who is doing a doctorate on the subject.