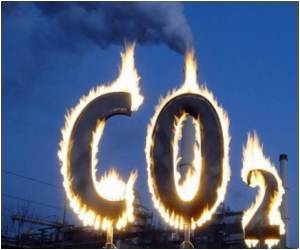 Dry water, anyone? Well the delightful oxymoron can work in the combat against global warming, scientists believe.

The unusual substance, which resembles powdered sugar, could provide a new way to absorb and store carbondioxide, it was reported at the 240th National Meeting of the American Chemical Society.

The powder shows bright promise for a number of other uses. It may, for instance, be a greener, more energy-efficient way of jumpstarting the chemical reactions used to make hundreds of consumer products. Dry water also could provide a safer way to store and transport potentially harmful industrial materials.


"There's nothing else quite like it," said Ben Carter, Ph.D., researcher for study leader Professor Andrew Cooper. "Hopefully, we may see 'dry water' making waves in the future."

The costs of adaptation to climate change in developing countries could go up to US$100 billion per year for the period 2010 to 2050.
Advertisement
Carter explained that the substance became known as "dry water" because it consists of 95 percent water and yet is a dry powder. Each powder particle contains a water droplet surrounded by modified silica, the stuff that makes up ordinary beach sand. The silica coating prevents the water droplets from combining and turning back into a liquid. The result is a fine powder that can slurp up gases, which chemically combine with the water molecules to form what chemists term a hydrate.

One of the most recent involves using dry water as a storage material for gases, including carbon dioxide. In laboratory-scale research, Cooper and co-workers found that dry water absorbed over three times as much carbon dioxide as ordinary, uncombined water and silica in the same space of time. This ability to absorb large amounts of carbon dioxide gas as a hydrate could make it useful in helping to reduce global warming, the scientists suggested.

Cooper and colleagues demonstrated in previous studies that dry water is also useful for storing methane, a component of natural gas, and may help expand its use as a future energy source. In particular, they hope that engineers can use the powder to collect and transport stranded deposits of natural gas. This also exists on the ocean floor in the form of gas hydrates, a form of frozen methane also known as the "ice that burns." The powder could also provide a safer, more convenient way to store methane fuel for use in vehicles powered by natural gas. "A great deal of work remains to be done before we could reach that stage," Carter added.

In another potential new application, the scientists also showed that dry water is a promising means to speed up catalyzed reactions between hydrogen gas and maleic acid to produce succinic acid, a feedstock or raw material widely used to make drugs, food ingredients, and other consumer products. Manufacturers usually have to stir these substances together to get them to react. By developing dry water particles that contain maleic acid, Cooper and colleagues showed that they could speed up the acid's reaction with hydrogen without any stirring, resulting in a greener, more energy-efficient process.

"If you can remove the need to stir your reactions, then potentially you're making considerable energy savings," Carter said.

Prof. Cooper's team describes an additional new application in which dry water technology shows promise for storing liquids, particularly emulsions. Emulsions are mixtures of two or more unblendable liquids, such as the oil and water mixture in mayonnaise. The scientists showed that they could transform a simple emulsion into a dry powder that is similar to dry water. The resulting powder could make it safer and easier for manufacturers to store and transport potentially harmful liquids.

Carter noted that he and his colleagues are seeking commercial or academic collaboration to further develop the dry water technology. The U.K. Engineering and Physical Sciences Research Council (EPSRC) and the Center for Materials Discovery provided funding and technical support for this study.

US researchers have proposed a new strategy to tackle the global climate dilemma: have a universal cap across the board for carbon emission and target the biggest polluters in a country.
Advertisement
Advertisement
This site uses cookies to deliver our services.By using our site, you acknowledge that you have read and understand our Cookie Policy, Privacy Policy, and our Terms of Use  Ok, Got it. Close
×