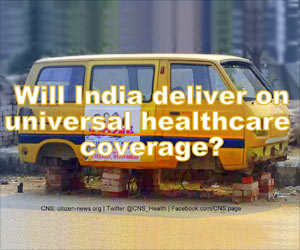 Union Minister for Finance, Arun Jaitley presented the budget for 2016-17. He said that the government will set up 3, 000 new drug stores across the country. He also announced about the launch of National Dialysis Programme to deal with the high costs involved in renal dialysis processes and health insurance of up to Rs 1 lakh per family.

India's draft National Health Policy 2015 was riddled with privatization bid and it is no surprise that 2016-2017 budget too takes that agenda forward. Also earlier this month Indian government indicated its intent to exit from hospital 'sector' (along with Air India). The vision of universal healthcare coverage - which leaves no one behind - can only be achieved from robust and well-funded public health system which is not running on cost-to-cost or for-profit motives. This is why privatization of public health system is not only weakening it but also jeopardizing access to healthcare for most in need.

National Dialysis Program, health insurance schemes for family and generic drug stores will be launched by the government
Advertisement
‘Health is a fundamental human right. It is the governments responsibility to ensure that every citizen is able to realize their right to health. ’

It is common sense that we cannot mop the floor when the tap is still running on it. Neglecting preventive healthcare and focusing on curative healthcare is a major problem with India's budget 2016-2017. For instance, the National Dialysis Service Programme that was announced is important because additional 2.2 lakh patients need kidney or renal care in India every year and we are majorly failing to provide this care. However we cannot ignore the scientific evidence that 40% of end stage renal disease (ESRD) precipitates because of diabetes and other 30% due to high blood pressure. There is a lot more that can be done to prevent or delay the onset of ESRD thereby reducing the number of people who may eventually need dialysis for instance. There are other linkages too of ESRD - for example with tobacco use or alcohol use. So a comprehensive preventive healthcare programme will help increase the programme effectiveness of curative component. But government prefers to ignore preventive aspect. Focusing on preventive aspect does not mean shifting priorities and competing with curative component, but both go in tandem.


If we look at curative and care component for ESRD, the situation is bleak just like in case of any other major disease in India. With just 500 dialysis centers and 3000 dialysis machines across the country, not only a large number of people are not able to access care but also a large number of people are finding it difficult to afford it. The cost of getting hemodialysis (12 dialysis per month) is around Rs 12,000 - 15,000 per month whereas cost for peritoneal dialysis is around Rs 18,000 - Rs 20,000 per month. So there is no doubt that National Dialysis Service Programme announced in this budget is of critical value but it is just half the battle won as we need equal if not more focus on preventive aspect as well.

Increasing the awareness of drug abuse, especially among youth, can help end the menace of the problem, Finance Minister Arun Jaitley has said.
Advertisement
Also we should not turn blind's eye to proverbial means to an end while delivering dialysis. Privatization is not the long-term solution. National Dialysis Service Programme is built upon Private Public Partnership (PPP) model. We believe PPP is equal to privatization and works only for the benefit of private players and weakens public health system. With government hospitals providing space, power, water and patients and private corporations investing in machines and supplies, the cost may appear to come down initially but this is taking us farther away from providing universal access to healthcare especially for poor and underprivileged. Providing dialysis on cost-to-cost basis is not an alternative to universal access to healthcare. PPP is systematically weakening public health system. We need to strengthen public healthcare facilities (by installing dialysis machines for example) as these can only serve those most-in-need.

Let's Take Another Announcement of This Budget Which is Much Touted:

Health protection scheme or insurance cover of up to Rs 1 lakh per family (and additional Rs 30,000 for senior citizens) is a welcome relief in times when seeking health services often drive people to poverty. But biggest health security is when every one of us gets healthcare we need as a right - regardless of our income or the cost it will incur for the state. Health insurance benefits companies, is common knowledge and does not work in favor of those most marginalized and most underserved. Also deducting tax on provident fund on one hand and providing additional health insurance for the elderly does not make much sense, does it?

Promise to open 3000 generic drug outlets is a welcome step in this budget 2016-2017. But lack of transparency when government negotiates trade agreements with countries or group of countries and how they impede access to essential medicines should also be looked into.

Universal healthcare coverage cannot be achieved on cost-to-cost model of health system or through initiatives such as PPP. Health is a fundamental human right and State's responsibility to ensure that every citizen is able to fully realize her/his right to health.

India's main program to fight child malnutrition has been hit by budget cuts that make it difficult to pay wages of millions of health workers.
Advertisement
<< US Could Apply UK's Approach to Evaluate Safety, Ethics in ...
New Formulation of FDA-Approved Drug may Help Treat Niemann-... >>