Vasundra Trust is Rewarded for Its Environment Conservation Programmes in Gujarat 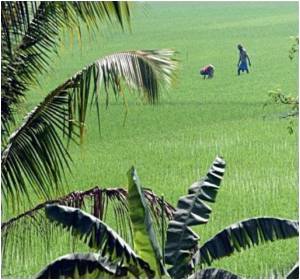 The Vasundhra Trust, a non-governmental organisation of Rajkot in Gujarat, has been recognised for its environment conservation programmes and has won a cash award of rupees one lakh from the Bharat Vikas Parishad.

The NGO, which is led by Vallabh Katheria, a former central lawmaker has mooted and executed extensive water harvesting projects by building check dams across streams and rivulets.

The aluminium industry here is producing household and decorative items in the colour green with the theme of environment conservation.
Advertisement

Founded in 1998, the Vasundhra Trust has also been active in counselling farmers involved with agriculture, animal husbandry, health, floating self-help groups (SHGs) of women, coordinating education in villages and rendering assistance during natural calamities like earthquake, floods, drought and cyclone.


The concept of check dams was promoted in Gujarat for water conservation since an ample amount of water could be collected in catchments areas of the dams.

A scientist has suggested that combining solar power plants with nature reserves could help provide green energy and wildlife conservation.
Advertisement
Thus, farmers have been able to get water even after the monsoons. The accumulated rainwater also would percolate and raise the water table in the area.

"When the check dams were built and it rained in the monsoon season, the fields got filled with water, its very advantageous. The problem of drinking water in the village was also solved. Earlier, when we used to plough our fields, we could not do it in any season except monsoons, not in the Rabi season. But now, due to these check dams, we can plough our fields in the Rabi season and our income has doubled and tripled," said Naran Pambhar, a farmer of Devda village.

As for the Vasundhra Trust, Katheria said the farmers could pump out water whenever they want and NGO workers would also help them to access other government schemes.

The NGO also has been planting trees in residential areas, temple compounds and schools.

NGO volunteers have been planting trees in crematoria and lent a fillip to the green cover in Saurashtra, regarded to be mostly arid.

They have planted around five lakh trees in around 861 villages of Rajkot District.

"Being in politics also, our main aim was to serve the people, uplift the people, especially villagers. So, for that, I worked for water harvesting and then tree plantation and after that we taught the farmers about organic farming, drip irrigation system, how to produce more in less land, and how to increase their income," Vallabh Katheria.

Environment Friendly Even After Death

Those who are environment friendly can contribute to the environment even after after their death by choosing the eco-friendly method of burial or cremation.
Advertisement
Advertisement
This site uses cookies to deliver our services.By using our site, you acknowledge that you have read and understand our Cookie Policy, Privacy Policy, and our Terms of Use  Ok, Got it. Close
×