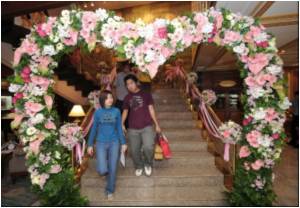 As couples around the world are ready and excited to celebrate the day of love, Valentine's Day. In Malaysia Islamic officials have warned Muslims against celebrating Valentine's Day.

The warning follows plans announced last week by several Malaysian states who are planning a crackdown on "immoral acts" during Valentine's Day as part of a campaign to encourage a sin-free lifestyle.

Valentine's Day, celebrated on 14th February every year, is synonymous with expression of love, friendship and bonding. The day is dedicated to the celebration of love.
Advertisement


"Islam would reject anything, even from the Eastern culture, if it contravenes the Islamic teachings," he added.

Wan Mohamad said a fatwa (ruling) issued by the country's top clerics six years ago noted the day "is associated with elements of Christianity," and "we just cannot get involved with other religion's worshipping rituals."

Several Malaysian states are planning a crackdown on immoral acts during Valentine's Day as part of a campaign to encourage a sin-free lifestyle, an Islamic party leader Wednesday.
Advertisement
JAKIM officials will carry out a nationwide 'Mind the Valentine's Day Trap' campaign, he said, aimed at preventing Muslims from celebrating the day.

Nasrudin Hasan Tantawi, head of the Islamic party PAS's youth wing said Wednesday that authorities in the opposition-controlled northern states of Kedah, Penang and Kelantan as well as central Selangor state will also carry out "immorality checks" on February 14.

PAS is part of the opposition alliance that won control of the four states in 2008 elections. Its conservative stance has caused friction with its two partners including the liberal and ethnic Chinese-based Democratic Action Party.

"We have identified spots in these states which are used by lovers and we are deploying local religious department officials as well as party members to stop such sinful acts like casual sex, which violates Islam," he told AFP.

Catholic church leaders say the day, which is named after Christian martyr Saint Valentine, does not have much significance as it was deleted from the church's calendar of saints in 1969.

They say the day is more commonly associated with people expressing their love for each other by sending flowers and chocolates or exchanging greeting cards.

Valentines Day was celebrated in New York by either tying the knot in the Empire State Building or "Getting some" of the newly-unveiled official condoms.
Advertisement
Advertisement

February 14th marks Valentines Day, a special day dedicated to your loved one. Here are some tips for a ...