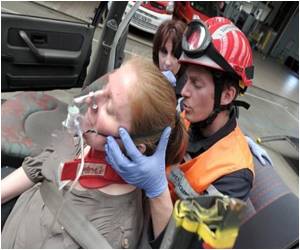 Moreover, the research shows, trauma patients of all races are 40 percent less likely to die  regardless of the severity of their injuries  if they are treated at hospitals with lower-than-expected mortality rates, the vast majority of which serve predominantly white patients.

The findings, described in an article published in the October issue of Annals of Surgery, offer confirmation and some insight, researchers say, for the fact that a patient's race and insurance status persistently make a difference in survival chances after a car crash, a gunshot wound or some other life-threatening injury treated in an emergency room.


Adil H. Haider, M.D., M.P.H., an associate professor of surgery at the Johns Hopkins University School of Medicine, says the new research may help answer one long-standing question: Is the reason for the disparity found in the biology or history of the patient or in the hospital treating that patient? His study, he says, suggests that the hospitals play the bigger role.
Advertisement
"It's not just differences in the patients," says Haider, director of the Center for Surgery Trials and Outcomes Research at Johns Hopkins. "All patients of all races do better at the trauma centers treating white majority populations, so this research tells us we need to direct attention to hospitals with higher mortality rates to help them improve their outcomes, or we won't ever be able to turn this around."

The emergency room, experts say, has long been perceived as a great care equalizer, given universal access to it and the highly standardized nature of trauma treatment protocols. But study after study has shown that minority patients and those without insurance are much more likely to die even if they have the same injuries as white and insured patients and are treated in the same ER.

Analyzing records from the National Trauma Data Bank, Haider and his colleagues separated 181 trauma centers from across the nation into three categories  low-mortality, or hospitals with lower-than-expected death rates (86 such centers); average (6); and high-mortality, or hospitals with higher-than-expected death rates (89).

They noted that 27 (15 percent) of trauma centers serve a population that is more than 50 percent minority, while 154 have patients who are predominantly white. Most of the trauma centers that serve predominantly minority patients (81.5 percent) were classified as high-mortality. And 64 percent of black patients in the study group were treated at these high-mortality centers compared to only 41 percent of white patients.

Haider says the analysis also showed that 45 percent of patients at high-mortality centers don't have insurance, compared to 21 percent at low-mortality hospitals.

When hospitals aren't well-compensated for the care they provide, Haider suggests, they may not be able to afford resources for quality-improvement programs, for new technology, or for staffing necessary to create a better hospital. He says hospitals serving majority white populations may have more financial resources because of a higher percentage of well-insured patients, and philanthropy. Their staff may be better able to update their skills, engage in more streamlined processes, and access blood supplies and a "deeper bench" of specialists and services dedicated to certain kinds of care, such as pharmacies and portable diagnostic equipment in the trauma center.

"Not every place can afford those things," Haider says. "And yet more than six of every 10 black trauma patients are served each year in high-mortality hospitals, which increases their risk of death. We need to find a way to help poorly performing trauma centers improve. In most cases, these centers are doing a very difficult job without enough resources. And if we try, we can certainly help these centers achieve better outcomes. It can't continue to be the case that the color of a patient's skin determines whether he or she survives a serious injury."

Current Blood Transfusion Practice in Trauma Centers Feasible but Wastes Scarce Plasma: Study
According to a randomized trial, the use of a 1:1:1 blood transfusion protocol in patients with ......

Closures of Hospital Trauma Centers Affects The Poor
The poor and uninsured African American populations are now at a major disadvantage due to the ......

Better Access to Trauma Centers for Serious Injuries Expected by Ontarians
A new poll has found that more than eight in 10 Ontarians say they would want to be taken directly ....