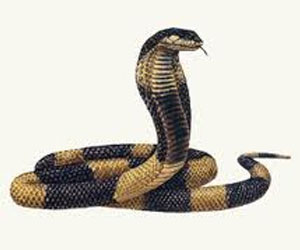 During a military training exercise in jungles in Thailand, a female Marine drank blood of a dead cobra. The U.S. soldier is one of around 13,000 taking part in Cobra Gold 2013, an annual, multi-national military training programme that incorporates jungle survival techniques.

According to the Daily Mail, after being taught how to kill the venomous snakes by Thai naval instructors, the Marines were given the option of experiencing a local custom that was drinking the animals' blood.

Many of the Marines appeared unperturbed at the prospect of drinking cobra blood, which is sold as an aphrodisiac in parts of Eastern Asia.


The U.S. Marines were taking part in Cobra Gold 13 alongside Thai military personnel and soldiers from five other countries- Japan, South Korea, Malaysia, Indonesia and Singapore.

Rattlesnake Venom Offers Hope For Skin Cancer Cure
A recent Brazilian study has thrown light on the use of rattlesnake venom in the fight against skin ...