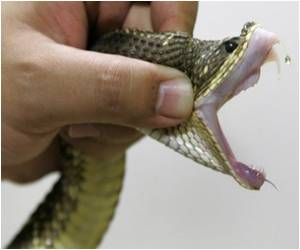 A recent Brazilian study has thrown light on the use of rattlesnake venom in the fight against skin cancer.

Chromatin, a protein isolated from the venom of the South American snake, increased the survival rate of rats with skin cancer by up to 70 percent, the Butantan Institute reported Thursday.

The protein also helped to significantly retard the development of tumors and even to completely inhibit their formation, according to Butantan, an institute linked to the health department of Sao Paulo state.


The researchers heading the unprecedented study discovered that the protein is able to kill cells but its toxic action is exclusively limited to melanoma cells, meaning that it does not affect an organism's other cells.

Encyclopedia section of medindia gives general information about skin biopsy.
Advertisement
The substance also remains inside a cancerous tumor for only about 24 hours.

Researchers admit that they still need to perform other tests on animals and, ultimately, humans before they can think about the possibility of developing a new drug.

The priority, however, before experimenting with it on humans, is to be able to synthesize the protein, that is to produce it in the laboratory without having to extract and process actual snake venom.

Are you worried about your skin? Read here more about skin
Advertisement
<< Alcohol Dependence Twice As Fatal For Women As Men
Coke's "Work It Out" Calculator Helps Consumers To Burn Cal... >>