US Doctor Infected With Ebola: Liberia 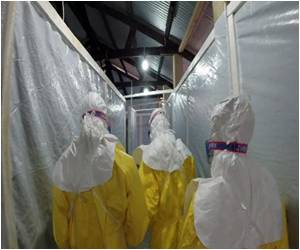 In Liberia an American doctor battling West Africa's Ebola epidemic has himself fallen sick with the disease.

Samaritan's Purse, a Christian charity, said Dr Kent Brantly had been isolated at the group's Ebola treatment center at the ELWA hospital in the Liberian capital Monrovia.

"Dr. Brantly is married with two children," the group said, in a statement posted to its website on Saturday.


"Samaritan?s Purse is committed to doing everything possible to help Dr. Brantly during this time of crisis. We ask everyone to please pray for him and his family."

Sources say Nigeria was on alert against the possible spread of Ebola on Saturday, a day after the first confirmed death from the virus in Lagos.
Advertisement
Brantly is the medical director of the Samaritan's Purse Ebola case management center in Liberia, where the agency continues to work with Liberian and international health officials to contain the outbreak.

Ebola is an haemorrhagic fever with a very high fatality rate. Liberia, Sierra Leone and Guinea have borne the brunt of the recent epidemic, and last week Nigeria recorded its first death.

As of July 20, the number of Ebola cases recorded in the months-long epidemic stood at 1,093, including more than 660 deaths, according to the World Health Organization.

The virus can fell victims within days, causing severe fever and muscle pain, vomiting, diarrhoea and, in some cases, organ failure and unstoppable bleeding.

Ebola is believed to be carried by animals hunted for meat, notably bats.

It spreads among humans via bodily fluids including sweat, meaning you can get sick from touching an infected person.

With no vaccine, patients believed to have caught the virus must be isolated to prevent further contagion.

Ebola first emerged in 1976 in what is now the Democratic Republic of Congo, and is named after a river there.

In West Africa, the death toll due to Ebola outbreak has risen to 660, reveals the World Health Organization.
Advertisement
<< Stigma Blocks Access to Care for Young Gays and Transgender...
Duke Medicine Researchers Identify Mechanism for Developing... >>

Eradicate Quackery, Save Lives
News Archive
News Resource
Advertisement
News Category
Death Caused by a Rare Type Amoeba: Research Study Japan Approves Smallpox Vaccine for Monkeypox Did Human Evolution Shrink Your Brain? What to Do When Your Asthma Medication Doesn't Work? Which is Better to Improve Smoker's Health  Cigarettes or E-Cigarettes?
More News
Sign up for Wellness Consult a Doctor Sign up for Selfcare

The Essence of Yoga Drug Interaction Checker Drug Side Effects Calculator Selfie Addiction Calculator Diaphragmatic Hernia How to Reduce School Bag Weight - Simple Tips Calculate Ideal Weight for Infants Blood Donation - Recipients Pregnancy Confirmation Calculator Hearing Loss Calculator
This site uses cookies to deliver our services. By using our site, you acknowledge that you have read and understand our Cookie Policy, Privacy Policy, and our Terms of Use