Understanding the Role of Mesp1 Gene in a Functional Heart 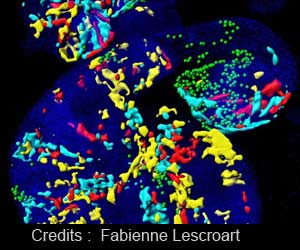 Mesp1 gene plays a major role in the cardiovascular lineage segregation. Congenital heart defects can be better understood with the help of Mesp1 gene.

The heart is the first organ that forms during development and contains four different regions (ventricles and atria), which contain different cells that perform specialized functions: the beating cardiomyocytes ensure the pumping activity, vascular cells represent the inner lining and blood vessels and the pacemaker cells set the heartbeat.


In human patients, these are recognized as congenital heart diseases, which represent the most common cause of severe birth defects in newborn babies. The research team was from the Université libre de Bruxelles and University of Cambridge.
Advertisement
Previous studies had shown that a diverse range of heart progenitor cells arises from different pools of cells expressing the Mesp1 gene. However, it remained unclear how the various progenitors can be distinguished at the molecular level, and what molecular mechanisms promote specification into a particular heart region or cardiac lineage.

In a new study published in early release of Science, researchers led by Pr. Cédric Blanpain, Laboratory of Stem Cells and Cancer, Université libre de Bruxelles, Belgium, and Pr. Berthold Göttgens, the Universtity of Cambridge, identified the role of Mesp1 in the earliest step of cardiovascular lineage segregation by single cell molecular profiling and lineage tracking.

To determine the role of the transcription factor Mesp1 in regulating the cardiovascular differentiation program and the heterogeneity of early cardiovascular progenitors, they also performed single cell molecular profiling of these early progenitors in a Mesp1 deficient context. These experiments showed that Mesp1 is required for the exit from the pluripotent state and the induction of the cardiovascular gene expression program.

Bioinformatic analysis identified, among these early Mesp1 progenitors, distinct populations of cells corresponding to progenitors committed to different cell lineages and regions of the heart, identifying the molecular features associated with early lineage restriction and regional segregation of the heart. While progenitor cells are not yet differentiated, this new analysis shows that cardiovascular progenitors are already "primed" or pre-specified to give rise to cardiac muscle cells or vascular cells.

The researchers found that these different populations are also born at different time points and are located at specific locations at this early stage of development. Finally, the researchers have identified the earliest branching point between the cardiac and vascular lineages, and shown that Notch1 marks the early progenitor committed to the vascular lineage during early embryonic development.

Understanding the molecular features associated with early cardiovascular lineage commitment and heart regions will be important to design new strategies to instruct cardiovascular progenitors to adopt cardiac or vascular identity from different heart regions that can be used for cellular therapy of cardiac diseases.

Future studies will be required to determine whether the paradigm of early lineage segregation identified here controls the formation of the different lineages in different organs and tissues. It will also be important to determine whether the molecular features uncovered here play a role in congenital cardiac malformations and can be used to push cardiovascular progenitors into a particular lineage, which can have important implications for improving cell therapy for cardiac repair» comments Pr Cédric Blanpain, one of the senior authors of this study.

The other senior author Pr Bertie Gottgens stated that "our new discoveries critically depended on recent technological innovations that now allow us to determine the gene activity profile of individual single cells. Not only can we study minute cell populations, which wasn't possible before, but we can also use the computer to separate the individual single cells into subgroups or cell types, based on their gene activity profiles. And from these newly discovered gene profiles, we can discover new candidate genes that may be exploited for developing new therapies to repair the heart, as referred to by Cedric".