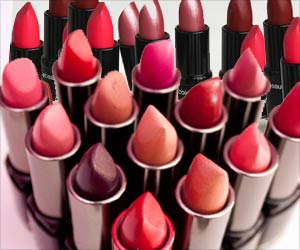 Lipsticks and lip glosses found in department stores contain lead, cadmium, chromium, aluminium and five other metals that could increase potential health concerns, say researchers. Their findings will be published online Thursday, May 2, in the journal Environmental Health Perspectives.

Prior studies also have found metals in cosmetics, but the UC Berkeley researchers estimated risk by analyzing the concentration of the metals detected and consumers' potential daily intake of the metals, and then comparing this intake with existing health guidelines.

"Just finding these metals isn't the issue; it's the levels that matter," said study principal investigator S. Katharine Hammond, professor of environmental health sciences. "Some of the toxic metals are occurring at levels that could possibly have an effect in the long term."


Lipstick and lip gloss are of special concern because when they are not being blotted on tissue or left as kiss marks, they are ingested or absorbed, bit by bit, by the individual wearing them, the study authors said. The researchers developed definitions for average and high use of lip makeup based on usage data reported in a previous study. Average use was defined as a daily ingestion of 24 milligrams of lip makeup per day. Those who slather on the lip color and reapply it repeatedly could fall into the high use category of 87 milligrams ingested per day.
Advertisement
Using acceptable daily intakes derived from this study, average use of some lipsticks and lip glosses would result in excessive exposure to chromium, a carcinogen linked to stomach tumors. High use of these makeup products could result in potential overexposure to aluminum, cadmium and manganese as well. Over time, exposure to high concentrations of manganese has been linked to toxicity in the nervous system.

Lead was detected in 24 products, but at a concentration that was generally lower than the acceptable daily intake level. However, the lead levels still raised concerns for young children, who sometimes play with makeup, since no level of lead exposure is considered safe for them, the researchers said.

The study authors say that for most adults, there is no reason to toss the lip gloss in the trash, but the amount of metals found do signal the need for more oversight by health regulators. At present, there are no U.S. standards for metal content in cosmetics. The authors note that the European Union considers cadmium, chromium and lead to be unacceptable ingredients at any level in cosmetic products.

"I believe that the FDA (Food and Drug Administration) should pay attention to this," said study lead author Sa Liu, a UC Berkeley researcher in environmental health sciences. "Our study was small, using lip products that had been identified by young Asian women in Oakland, Calif. But, the lipsticks and lip glosses in our study are common brands available in stores everywhere. Based upon our findings, a larger, more thorough survey of lip products and cosmetics in general is warranted."

Source: Eurekalert
Advertisement
<< Parents of Young Children Warned To Be Alert to Blind Cord ...
Morning-after Pill for Age 15 and Up Approved >>

Lipstick can Help Save Elderly Women's Lives!
And older women have better posture even when they wear just basic cosmetics, the study of 100 ...

Poisoned Lips Leading Lipstick Brands High On Lead Content
Women might do well to think for a moment before layering on their red lip wands....