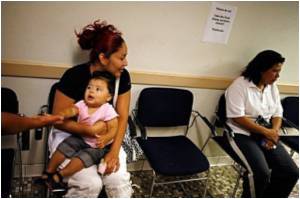 Doctors have warned in Archives of Disease of Childhood that window blind cords pose a particular risk of accidental strangulation for young children.

Children between the ages of 16 and 36 months seem particularly vulnerable, they say.

The warning comes after they treated a 22 month old boy who was brought into the emergency department. He had been found hanging on the pull chain of a window blind cord.


His mother found him blue and not breathing after leaving him with his sister in a bedroom for a few minutes. He had clear strangulation marks on his neck and extensive skin mottling (petechiae) on his face.
Advertisement
After an overnight stay in hospital he was discharged, but the authors warn that not every child in this situation is so lucky. And they suspect that there are rather more incidents than doctors actually see.

"In the UK, it is thought that one or two young children die each year from blind cord strangulation," they write. "It is believed that there are probably many more under-reported near misses."

Data from the US indicate that more than 200 infants and young children have died in the US after accidentally strangling themselves with window blind cords.

The death rate from strangulation is high, the authors warn, adding that the evidence suggests that children between the ages of 16 and 36 months seem to be most vulnerable.

At this age, they have relatively large heads, compared with the rest of their bodies, as well as softer windpipes and less well developed muscular control than adults, making it harder for them to disentangle themselves, say the authors.

"Many millions of blinds are sold every year in the UK and looped blind cords are a potential hazard for babies and young children," they write.

The British Blind and Shutter Association, in association with the Royal Society for the Prevention of Accidents (ROSPA), have produced safety information for parents on the potential dangers of looped window blind cords.

The recommendations include installing cordless blinds, short pull cords, use of safety devices, and keeping children's cots/beds away from blind cords.

The best option would be a ban on looped window blind cords, say the authors, but until then, "it is imperative that parents are educated about the hazards of window blind cords and appropriate safety devices are installed in homes with young children," they conclude.

Five-year-old Who Escaped Strangulation by Her Mother and Saw Her Parents Commit Suicide Recovering
Five-year-old Manisha of Bangalore in southern India, who saw her parents commit suicide and ......

Expert Reckons the Presence of a Toxin in Woolmers Body
A Canadian pathologist has alleged that former Pakistan cricket team coach Bob Woolmer, who was ......